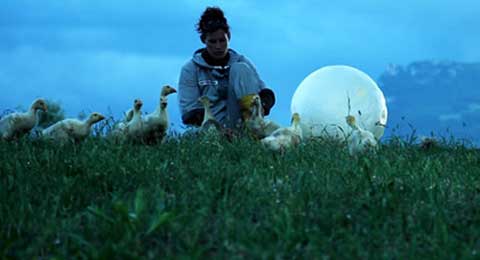 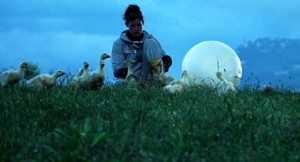 An artwork that was part of FACT’s Republic of the Moon exhibition has won a major international award.

Visitors to FACT will remember Agnes’s work, which could be seen in the Gallery 1 space between December 2011 and February this year.

Inspired by what is considered to be the first ever science fiction novel, Francis
Godwin’s The Man in the Moone, the artist bred eleven ‘moon geese’. In the story,
the geese flew to the moon, carrying a chariot.

So raising them from birth and giving them astronauts’ names, Agnes trained
her geese to fly, took them on expeditions and housed them in a remote moon
analogue habitat in Pollinaria, Italy. Back at FACT, visitors to the exhibition could
see and interact with the geese in real time from a control room in the gallery.

The Prix Ars Electronica, now in its 25th year, is open to anyone who uses
computers as a medium to implement and design creative projects at the
interface of art, technology and society. Not only that, but it also offers the largest
cash purse for cyber arts worldwide. Agnes, who lives and works in Cologne,
was recognised in the ‘hybrid art’ category.

The ceremony was held in Linz, Austria last week, where Ars Electronica is an
internationally unique platform for digital art and media culture. It consists of four
divisions: the Prix, an avant-garde festival, a museum, and a media art lab.

The Moon Goose Analogue: Lunar Migration Bird Facility was a major commission
by FACT Liverpool and The Arts Catalyst in partnership with Pollinaria.

FACT is delighted to see Agnes win such an important award and be recognised
on the world art stage.

Eighteen for 18 – The Giants May Return to Liverpool in...