The project #TOUCHMYSOUL by LaBeouf, Rönkkö & Turner took place at FACT (Foundation for Art and Creative Technology) in Liverpool from 10 to 13 December 2015.

Over the four days, LaBeouf, Rönkkö & Turner invited the public to pick up the telephone and touch their soul on +44 (0)151 808 0771 during gallery opening hours, while being sat in FACT’s Gallery one which was open for visitors.

The performance culminated in Rönkkö tattooing the words “You. Now. Wow.” onto LaBeouf’s arm – a quote taken from one of the calls, fittingly embodying the indelible marks of connection and community that were made over the four days of the project.
You can watch a video of the tattooing on Vimeo: https://vimeo.com/148994930

Here is a photo of the finished tattoo from the collective’s Instagram: https://www.instagram.com/p/_PqUp0BnFF/

#TOUCHMYSOUL is part of the group exhibition Follow, open to visitors until 21 February 2016 (admission free).

At FACT, visitors now have the opportunity to hear a selection of the phone calls taken from the four-day long performance, and listen to the moment callers from all over the world who tried to form a connection to the collective.
As well as the phonecalls, the project was also captured via Livestream, Twitter, and a Googledoc into which each of the artists transcribed the conversations as they were happening in real time; these, as well as a short film of the tattooing, are all available for visitors to relive the performance in the space.

3129 people visited the Gallery during the performance, while 271,672 watched it via Livestream. 1089 people managed to get through to the collective via the phone. 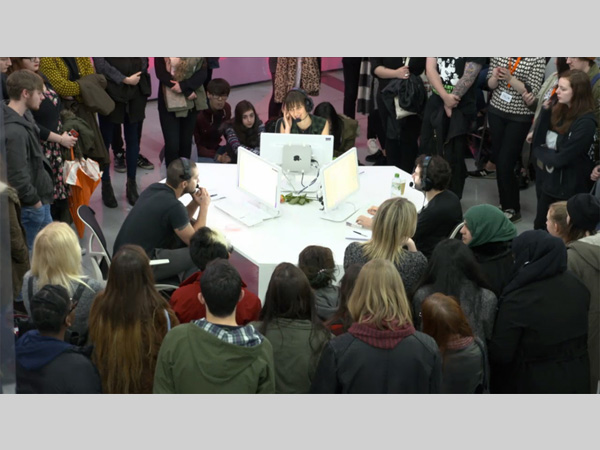 Barclays Wealth partners with Museum of Liverpool for exhibition sponsorship