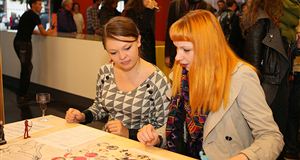 Every Wednesday evening over the 12 weeks of the Biennial, the gallery spaces will be open until 9pm, giving people more chance to see Akram Zaatari’s first solo UK exhibition, and the acclaimed new commission Ultimate Substance by filmmakers Anja Kirschner and David Panos.

Visitors can also continue to get hands on with Pedro Reyes’s popular Melodrama and Other Games, and see Jemima Wyman’s Collective Coverings, Communal Skin, a large-scale weaving project that is taking over the public space in FACT over the course of the Biennial.

And as part of the Biennial’s The Unexpected Guest exhibition, FACT will be showing a weekly film programme inspired by the 2012 theme of ‘hospitality’. The series features contemporary artists who have turned their attention to feature-length filmmaking and mainstream cinema.

Highlights of the film selection, which will also take place every Wednesday (and sometimes Tuesdays too) include the recently releasedMarina Abramovic: The Artist is Present, Steve McQueen’s Shame, John Akomfrah’s The Nine Muses and Ben River’s Two Years at Sea.

FACT will be welcoming a number of international artists to the venue for a series of UK premieres and previews, too.

On October 9, Mexican artist Amanda Gutierrez will present the UK premiere of her most recent piece of work, Time Topographies: Liverpool. This project was created as a result of her recent residency at FACT as part of the European Media Art Residency Programme (EMARE). A filmic triptych portraying the story of three immigrants living and working in Liverpool, this special presentation will feature a live performance from those featured in the work as well as a Q&A session with cast and artist.

American artist and filmmaker Wu Tsang will be at FACT to accompany the preview screening of Wildness on October 24, ahead of its UK premiere at Tate Modern in 2013.

Further Q&A sessions will take place with Matt Wolf, Al & Al, and Karen Mirza and Brad Butler, who will all be present alongside screenings of their works.

Tickets for all screenings and events are available now on 0871 902 5737, online, or in person at the box office at FACT. For full listings and further information, visit www.fact.co.uk.

From underpaid truck drivers in LA, to Filipino maids in China, this film highlights the everyday people whose role in the global economy goes largely undocumented. Drawing from interviews and archival materials The Forgotten Space offers a lucid and lyrical portrait of worker’s conditions, the imbalance of international trade and the secret lives of port cities.

We hope to be joined by Allan Sekula for a Q&A.

A teenage girl, together with her best friend, flees the boring claustrophobia of her humdrum life in Florida to track down her father in Nashville. Their journey into adulthood and independence offers a dark flip side to the sanitised worlds they have seen on television.

Michael Fassbender plays Brandon, a man for whom sex is a compulsion that keeps him isolated from any form of intimacy. He has a successful career and an expensive apartment but lives a solitary life both fuelled and undermined by his obsession. Like McQueen’s previous film Hunger, Shame finds beauty and grace in improbable situations.

Post-Revolutionary Cities on Film: Cologne Overnight and On Our Own (12A)

Dublin-born, Berlin-based artist Declan Clarke’s film Cologne Overnight considers the development of 20th Century Western ideals through the ruins that have been left in their wake. This is presented alongside the UK premiere of On Our Own We Are Free To Do Many Things which explores post revolutionary Romania. Clarke will be joined by Sarah Perks from Cornerhouse, and FACT’s Omar Kholeif to discuss the void that occurs after ideology collapses in a post-revolutionary situation.

Responding to the theme of Hospitality, Mexican artist Amanda Gutierrez portrays the story of three immigrants living and working in Liverpool, illustrated by images of the city and a screenplay constructed out of oral stories. This special presentation of the triptych features a live performance and Q&A with the artist and cast.
Supported by the European Media Art Residency Exchange Programme. The project has been funded with support from the European Commission and solely reflects the views of the author. The Commission cannot be held responsible for any use that may be made of the information contained herein.

This haunting documentary is a meditation on the life of Egyptian screen legend Soad Hosni whose mysterious death in 2001 sent shockwaves through the Arab world. Using filmic montage, director and video artist Rania Stephan reveals the diverse modes of female representation embodied in Hosni’s charismatic roles, and creates an exhilarating picture of the iconic actress who captivated the modern Arab imagination.

Marina Abramovic: The Artist is Present (15)

“But why is this art?” is a question that performance artist Marina Abramovic has been hearing for the past 40 years as she uses her body to push the boundaries of performance. This documentary takes us inside Marina’s world, following her as she prepares for what may be the most important moment of her life, a major retrospective of her work at the Museum of Modern Art in New York.

This special event is a collaboration between FACT and Static in Liverpool and Dublin based organisations Graduate School of Create Arts and Media (GradCAM), The LAB Gallery, Create (Ireland), Temple Bar Gallery & Studios and Art in the Contemporary World (NCAD). Taking our cue from the theme of hospitality, this event will explore ideas of the host, guest and our role as public.  Under the title “break bread open” artists, writers and educators from the Food Thing, a collaborative art project based in GradCAM will serve a buffet to include “All Fingers and Tongues: Hosting the Divine” with Charlie Gere & MOUTH (Edia Connole and Scott Wilson); a special screening introducing new work by Jesse Jones, discussions led by writer Declan Long and writer/curator Dr. Paul O’Neill and more.

A portrait of the Silver Platter, a historic, LGBT-friendly bar on the eastside of Los Angeles that has catered to the Latin immigrant community since 1963. Wildness captures the creativity and conflict that ensue when a group of young, queer artists of colour organise a weekly performance art party. This event will be followed by a Q&A by the artist and filmmaker Wu Tsang.

The UK Premiere of Wildness will be launched with a major screening and event in the Tanks at Tate Modern, London on Saturday 2 February 2013

This forum celebrates the Random Acts series of commissions – including new commissions from FACT for the strand – and opens up a dialogue about the future of television as a shared space that has the potential to bridge new relationships between socially engaged audiences, curators, creative producers, and broadcasters.

Produced by FACT Liverpool and presented across the UK by the Cross Arts Venue (CAV) Network in partnership with Channel 4, Arts Council England and the Liverpool Biennial.

A collaboration between artists Karen Mirza and Brad Butler and author China Miéville. It is an audacious, semi-fantastic history of the opposing forces of popular protest and clandestine control told through archive material, contemporary footage and future speculation. Commissioned by Film and Video Umbrella. Funded by Arts Council England and London Councils.

This film explores of the legendary myth of Alan Turing, father of the computer age and maker of Artificial Intelligence machines. Combining Lynchian nightmare with the prophetic themes of J.G. Ballard, The Creator takes you into the surreal dream world of the visionary scientist, where his binary children embark upon a quest to discover their origins and destiny in the universe. This new film commission premieres on the centenary of Turing’s birth. Commissioned and produced by Cornerhouse and Creative England (previously as Vision + Media). This screening forms part of Homotopia Queer Arts Festival.

The director of the Arthur Russell documentary Wild Combination, Matt Wolf returns to FACT to present previews of two highly anticipated films never before seen in the UK. I Remember is inspired by Joe Brainard’s legendary memoir poem of the same name creating an innovative biography of this underground icon. Teenage is adapted from the legendary Jon Savage book and tells the story of the invention of teenagers. This film also forms part of Homotopia Queer Arts Festival.

Two Years at Sea (U)

A man called Jake lives alone in a ramshackle house in the middle of the forest. Seen across the seasons surviving frugally and passing the time with strange projects, he is living the radical dream he had as a younger man. Ben Rivers’ debut feature-length work, shot on 16mm film, extends his relationship with Jake, first encountered in his short This is My Land.

Still only a Penny for Readings! The Reader Organisation Announces Dates...