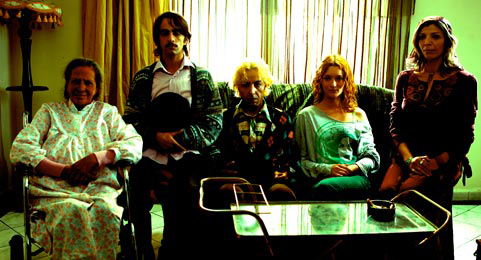 Supported by Vision+Media, awarding funds from the UK Film Council and The National Lottery

Liverpool Arabic Film Festival is the UK’s only film festival dedicated to film from the wider Arabic world. LAFF will examine the history and politics of the Arabic-speaking world through the eyes of renegade filmmakers such as the late great Egyptian director Youssef Chahine, as well as contemporaries such as Yousry Nasrallah, Marianne Khoury and Khaled El Hagar, whose films expose the culture and identity of the fluctuating Arabic-speaking countries.

The seven-day festival includes UK premieres of The Man Who Sold The World (2010) by Moroccan/Spanish siblings, The Noury Brothers, and Marianne Khoury and Mustapha Hasnaoui’s documentary, Zelal (2010), alongside re-mastered classics, Cairo Station (1958) and Alexandria, Why? (1979).

Youssef Chahine’s The Land (1969), Cairo Station (1958) and Alexandria, Why? (1979)
A rare opportunity to see a trio of classics by late Egyptian director Youssef Chahine (1926-2008) in re-mastered 35mm. Chahine made spectacular melodramas that gave birth to modern Arabic cinema, but his films were controversial – confronting themes such as homosexuality and government corruption.

UK premiere – Zelal (2010)
The first Arab film to explore mental illness, Marianne Khoury and Mustapha Hasnaoui’s documentary is a journey into two of Cairo’s locked-door hospitals – unveiling run-down psychiatric units and a state culture of neglect and disrepair. The screening will be accompanied by a talk from psychoanalyst, Helen Taylor Robinson.

UK premiere – The Man Who Sold The World (2010)
An adaptation of Dostoevsky’s short story, A Faint Heart, Moroccan/Spanish siblings Imad and Swel Noury’s The Man That Sold The World (pictured) is an experimental slice of art house cinema that pays homage to a mixture of European and Arabic influences.

FACT Film Programme Curator Omar Kholeif said:
“In a city that houses one of the largest Arab communities in the UK, and the country’s only annual Arabic multi-arts festival, it’s a great moment to launch a film festival showcasing Arabic cinematic talent. It is also especially timely – with the constant changes and restructures in the Arab world.”

Image: ‘The Man Who Sold The World’ via FACT website.

Tall Ships in Liverpool This Weekend