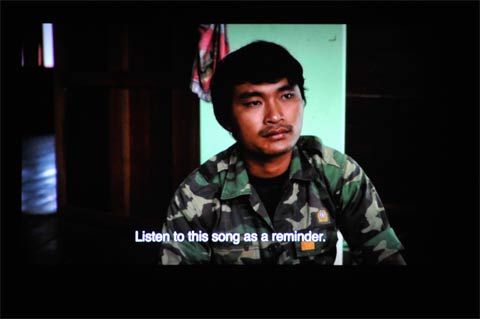 FACT is delighted to announce its first ever Gay Sunday. A special event for LGBT audiences to coincide with this year’s Homotopia Festival, Gay Sunday features an afternoon tour of award-winning gay artist and filmmaker Apichatpong Weerasethakul’s new multi-screen video installation Primitive at FACT and a post-tour discussion.

For the exhibition, Apichatpong lived in the sleepy Thai village of Nabua where he invited male descendants of communist farmers to come together for a cathartic and liberating expression of the effects of a violent history that once took hold of the village. The resulting video work is a ghostly, disjointed narrative about trauma, science fiction and truth.

Apichatpong’s unconventional films explore sexuality, power and alienation, which has led to censorship in his native Thailand. A political activist, Apichatpong has opposed the Thai government’s homophobic policies and written passionately about the future of Thai cinema under military dictatorship.

The exhibition’s curator Karen Newman will discuss this and Apichatpong’s current work as she leads a special tour of the galleries. Afterwards, guests will be invited to discuss the issues and themes over coffee. Book your place on the tour by emailing rsvp@fact.co.uk

Second Run DVD has kindly donated copies of Apichatpong’s films to be won on the day, along with copies of FACT’s 20th anniversary book We Are the Real Time Experiment.
Presented in conjunction with Homotopia www homotopia.net

Joan Burnett, Visitor Services Manager, FACT:
“Building on FACT’s success with group-specific events such as Silver Screen, £2 Before 4, Big Scream, Kid’s Club, Freehand and Tenantspin etc, Gay Sunday is about providing a safe, comfortable and friendly place for LGBT people to meet up and talk about art.”

A Win for the Williamson! Davy and Kristin McGuire to Exhibit

Former Cinema to be Biennial Hub