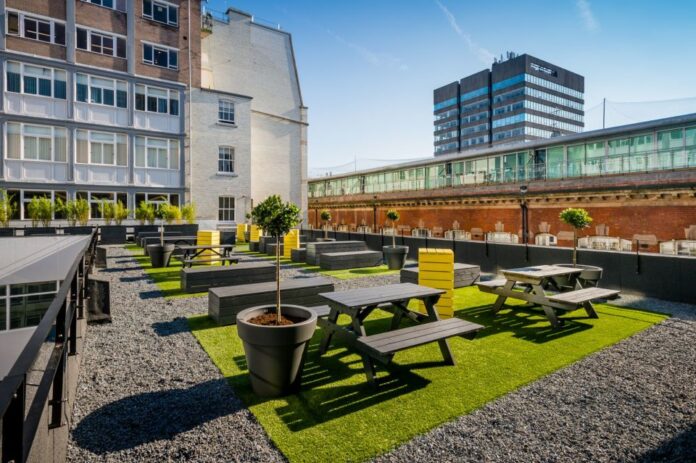 Launching this summer, FACT Liverpool presents Cinema in The City, a brand new film programme of weekend screenings in hidden locations across the Liverpool city region. Each screening will bring together the best in independent cinema whilst showcasing emerging talent from local filmmakers with food and drink stalls from the city’s most loved restaurants.

The summer of screenings kicks off on Friday 4 July at the stunning and historic Cotton Exchange Rooftop Garden with open-air showings of directors Bill Ross IV and Turner Ross’ Bloody Nose, Empty Pockets, Francis Lee’s Ammonite and Christos Nikou’s Apples. The Grade II listed building on Ormond Street is a short walk from Liverpool One and Liverpool’s famous waterfront and it will be the very first time that films have been screened on the building’s rooftop. Film fans will enjoy a unique, once in a lifetime opportunity to experience an entire weekend of critically-acclaimed film against the backdrop of the city’s iconic architecture. Middle Eastern inspired food and drinks will be provided by locally renowned restaurant, Maray, who will host their own pop-up food stall.

The inaugural weekend will give film fans from all over Liverpool the opportunity to rediscover film and catch some of the best releases that were missed in 2020 due to the prolonged closure of the city’s cinemas. It will be one of the first times that audiences can see the much anticipated and BAFTA nominated Ammonite, alongside Apples, which is scheduled for release in cinemas later this month following its premiere at the 77th Venice International Film Festival last September and Bloody Nose, Empty Pockets which will finally make its big screen appearance too following a streaming release last year.

FACT recognises that Liverpool is an inherently cinematic city, serving as the location for many film and TV shoots whilst also being home to many artists and filmmakers taking their first steps in the industry. Supporting film and local talent is at the heart of FACT and Cinema in The City will provide local filmmakers of the future with an exciting opportunity to screen their own short films to an audience of keen cinemagoers prior to each and every screening. To be the first to hear about how to get involved and how to submit your films, you can sign up to FACT’s mailing list at fact.co.uk/newsletter and keep your eyes peeled on social media for an announcement coming soon.

In the semi-constructed circumstances of the compellingly ambiguous Bloody Nose, Empty Pockets, director brothers Bill and Turner Ross tap into the community spirit that local bars engender and the real connections people make in unexpected places. It’s the last night ever at the Roaring 20s cocktail lounge, and all’s fair in boozy truths and wavy fictions.

Francis Lee follows up God’s Own Country with Ammonite, a film that is every bit as immersive, tactile and emotionally powerful, aided by the devastatingly good Kate Winslet and Saoirse Ronan. In this fictionalised account of the life of 19th century palaeontologist Mary Anning, Winslet plays the pioneering scientist with Ronan as the gentlewoman who falls in love with her while staying in Mary’s beloved Lyme Regis.

Could it be that we are the things we don’t forget? In director Christos Nikou’s Apples, Aris, a solitary man in his late thirties, becomes a victim of an unexplained surge of memory loss disorders in his city and is forced to confront his severe amnesia through an experimental new treatment.

Cinema in the City at Cotton Exchange Rooftop Garden runs from Friday 2 July to Sunday 4 July with screenings each day. Keep an eye out later in the year for further dates and announcements on new locations, exciting films and local food and drink traders.

Tickets will be released on Tuesday 18 May, to find out more go to fact.co.uk/cinema-in-the-city

Arts Council England announces over £414 million funding in the North