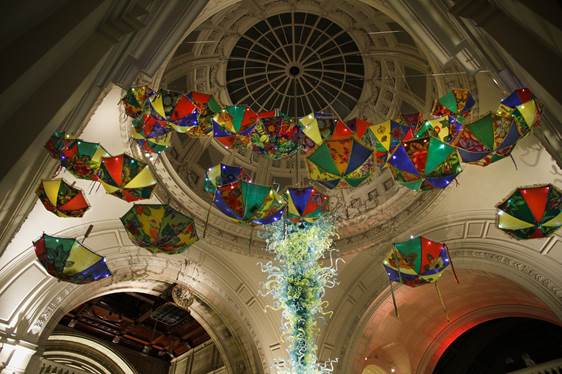 A stunning exhibition of hand-painted and illuminated umbrellas is going on display as part of this year’s Brazilica festival.

Frevo Drop is curated by arts collective Braziliality, and comes to Liverpool from the London V&A Museum.

The installation of 30 original frevo umbrellas will be available to view in Metquarter from Friday July 12, right through the Brazilicafestival week. Metquarter will also be holding costume-making workshops suitable for all the family.

Frevo is a Brazilian style of high tempo carnival music and dance so distinct to the culture of the north east region of Perambuco that it is recognised by UNESCO. Dancers with frevo bands are known for their energetic moves accompanied with the waving of colourful parasols.

The relevance of the umbrellas is more than just spectacle, and can be traced back the late 19th Century and the origins of the dance, when competition between frevo bands on parade could be deadly. Fights would erupt in the crowds, and bands had to resort to hiring protection. The Brazilian martial art capoeira was illegal on the streets, so fighters would cover up their moves as dance and used the seemingly harmless props of umbrellas as weapons to avoid arrest.

Today, frevo costumes and parasols are still inspired by the traditional folk styles of Perambuco, and needless to say the dance forms part of Carnival celebrations and is no longer associated with violence.

Frevo Drop will be free to view between the Metquarter’s opening hours of 9.30 to 18.00 every day, and is part of Brazilica’s exciting events programme.

Now in its third year, Brazilica 2012 attracted crowds of more than 80,000, and this year’s festivities are expected to be busier than ever with attractions including Frevo Drop spread over a full week leading up to the main carnival event on Saturday July 20.

Jennina O’Neill, centre manager at Metquarter said: “We are delighted to be working with Brazilica and to be hosting the Frevo Drop exhibition at Metquarter. As one of the top style destinations in the heart of Liverpool, it seems the perfect fit to partner with one of the city’s most exciting, lively and colourful festivals.

“Frevo Drop is a visually stunning and unusual exhibition and we’re sure it will attract a great deal of attention. We’ll also be hosting a series of family-friendly costume–making workshops during the Brazilica week – so we’re definitely expecting festival fever to be running high amongst our visitors.”

New Arena Opens – Do Something Different

Titian – Diana and ActaeonLast week of Renaissance master display at...