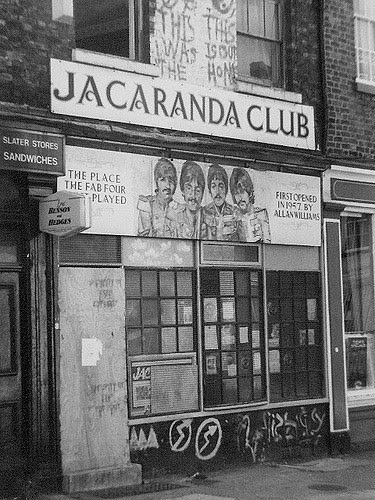 Exhibition at the Jacaranda, celebrating 60 years

This August Bank Holiday weekend will be full of celebration as the legendary Slater Street club, The Jacaranda, turns 60 years old!

As one of the first coffee bars in post-war Britain, The Jacaranda Club – affectionately known as “The Jac” – was opened byAllan Williams in 1958, featuring a record shop upstairs and live music in its basement. One of these groups was The Silver Beetles, featuring art students John Lennon and Stuart Sutcliffe, who Williams employed to paint the walls and a mural in the basement.

The exhobition features artefacts and ephemera from the Jac’s legacy and history; then and now, and is curated by Liverpool-based Marlie Centawer, a writer, musician and photographer, as well as an adjunct lecturer with the Centre for Studies in Arts and Culture at Brock University, Canada.

Much of the exhibition has been donated from original attendees, some loaned from galleries and collec- tors, and other images extracted from Beatle books and documentaries, including members-only cards used for entry to the club in the 1960s, advertisements in local Liverpool music newspapers, and images of the venues’ interiors and layouts over the years.

This archive material has been paired with Centawer’s more recent images, which document the energies and aesthetic of ‘the new Jac’ since its re-opening in 2015, inspired by the work of photographers Astrid Kirchherr and Nan Goldin. Kirchherr’s iconic images of The Beatles in Hamburg are also featured – and for sale – in the exhibition. Original prints of the posters for The Beatles’ first and last appearances at The Jacaranda, designed by Tony Booth, will also be on display. There will be reproductions of the Jacaranda posters available for sale on the evening, along with the book Tony Booth’s The Beatles in Posters (Histo- ry Press 2017).

Centawer’s research on 1960s British music and youth culture found her fascinated with The Jacaranda and she soon realised her experience was part of a much larger tradition in the history of British music and nightclubs: “Places like The Jacaranda Club make us feel connected to something much larger than ourselves; The Jacaranda has housed these types of transformative experiences for people for sixty years and we want to celebrate its powerful legacy with this exhibition and weekend of events.”

A trip to the newly reopened Jacaranda Club’s open mic on her first night in the city, and where where she knew no one, changed everything: “I descended down those stairs, on Paul McCartney’s birthday no less, and a whole new world opened up to me: a community of musicians playing some of the best music I’d ever heard, in this incredible iconic basement. I felt like I was welcomed into and belonged to some new, exciting cultural moment, made amazing new friends at midnight, and never wanted to leave.”

The exhibition continues at Jacaranda Records Phase One, in association with RedHouse Originals. Images on display at the new venue include Mike McInnerney’s poster for the ‘14 Hour Technicolor dream’, Dudley Edwards’ mural produced for Ringo Starr, and contemporary works by Thomas James Butler and more.

Graham Clarke (The Jac’s owner since the 80s) explains:

“We’re delighted to be spending the weekend drawing together and celebrating values and visions that are so close to our hearts. We are just as excited to welcome back familiar faces as we are to embrace those whose journeys with us are just beginning.”

The exhibition features an opening reception at 5.30pm on Friday 24 August, and runs for The Jacaranda Club’s 60th weekend celebrations, which include live bands, DJ sets, and more.

Following the opening, attendees are invited upstairs to Jacaranda Records for an inspiring talk about the history of British nightclubs and music venues (including The Jacaranda) and book signing with legendary Hacienda DJ, music journalist, writer and cultural critic Dave Haslam, who discusses The Jacaranda Club in his book “Life After Dark: A History of British Nightclubs and Music Venues” (2015). Haslam’s talk will be followed by a book signing of a selection of his titles, including his most recent memoir “Sonic Youth Slept On My Floor: Music, Manchester and More” (2018), both of which will be available for purchase at the talk and in both Jacaranda Records (Slater Street) and Jacaranda Records: Phase One (Seel Street) locations. Following the talk, Haslam will head down to Phase One for a DJ set.

Please RSVP to attend the talk, and gain free entry to his DJ set.

The unique history of The Jacaranda is worthy of enormous celebration – as is the phenomenal new music currently emanating from the city.

Almiro Gallery Closed – Some Artworks Still to be collected