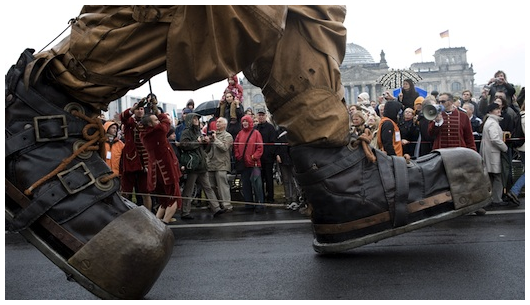 EVEN BIGGER!Second giant for Sea Odyssey – and we want your help!

Members of the public given chance to be part of show

WHAT’S better than one giant exploring Liverpool?  How about two giants… Anticipation is already mounting around what will be the UK’s biggest street theatre event in 2012, as April’s large-scale extravaganza sees a 30 foot Giant Little Girl roaming North Liverpool and the city centre. But she won’t be the only one. Also hitting the streets is her 50 foot tall uncle who will arrive in the city as part of Sea Odyssey which runs from 20 – 22 April. The stars of the show will explore North Liverpool and the city centre, taking in some key city spaces.  The story around why the two giants are here is secret until a few weeks before the event.  However, French creators Royal de Luxe (RDL) have promised a moving story of love, loss, family and communication which transcends time.  Set to be the biggest and most ambitious event the city has ever held, it will take audiences on an emotional journey through our maritime history – with the city’s streets as the stage. Sound exciting?  Well why not be part of this memorable show.  Culture Liverpool is recruiting Sea Odyssey volunteers for the largest programme the city has seen since 2008.   Open to anyone over the age of 18, there are more than 200 positions available which cover four areas: Giant operators – physically involved with moving the marionettes (operators are also known as ‘Liliputiens’). Benevol team – becoming part of the cordon to help move the Giants through the crowds. Volunteer support – technical and operational staff including special effects assistants, sound engineers, drivers, welders and production assistants. General volunteers – based in the city centre and North Liverpool they will welcome visitors and provide information about the event.  Some of the roles require specific skills and abilities, and most will be physically demanding, so the team are on the look out for people with a good level of stamina. Details of all the roles can be found at www.giantspectacular.com and click on ‘Get involved’.  Application forms can be filled in online and must be submitted by 5pm on the 21 February 2012. For anyone who would like to know more about Sea Odyssey and the volunteer roles, presentations will take place in the Small Concert Room at St George’s Hall on Thursday 16 February at 10am, 2pm and 5.30pm.  The presentation will last for an hour and there will be the opportunity to ask questions to the team involved. Successful applicants will be invited to take part in informal interview/auditions in March. Liverpool city council’s cabinet member for culture and tourism, Councillor Wendy Simon, said: “This event is growing and the excitement grows with it!  “To have two giants exploring the city, discovering some of our most-loved landmarks, will be a fantastic sight and it gives a new dimension to the whole Sea Odyssey experience.   “I’m delighted we can give people the once-in-a-lifetime opportunity to be part of the event.  It will be incredible to see the show, but to play a role at the heart of the action – whether it’s operating the giants or welcoming visitors to North Liverpool – is something that will stay with people forever. “I hope many people put themselves forward to be volunteers and be part of something truly special.” Matthieu Bony, Directeur des Manoeuvres for RDL, said: “After a long period of research, the show in Liverpool is nearly here and I am looking forward to working with the team to bring this moving story to life. “The Company were very keen for the show to extend into the North Liverpool suburbs, making this the most challenging route in terms of length and gradient which our Liliputiens will have travelled with the Giant Uncle. “As Royal de Luxe’s Director of Manoeuvres for the Uncle, myself and the team have worked in many cities, but Liverpool holds a special place in our hearts. We can’t wait!” The city council has been working with RDL since 2006, and the extravaganza is expected to attract 250,000 people to the city. Funding is in the final stages, but will be a mixture of public and private investment.  There is already support from the National Lottery through Arts Council England and the European Regional Development Fund and Sea Odyssey is the final event which will use European legacy funding from the city’s Capital of Culture year in 2008.Find out the latest by visiting the Sea Odyssey website – www.giantspectacular.com­, and why not ‘Like’ the Giant Spectacular page on Facebook or follow Giant Spectacle on Twitter.

Bluecoat’s Head of Programme to curate Wales in Venice Biennale