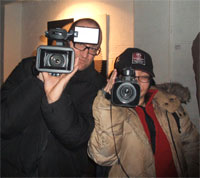 If you were out on Friday night you may have seen me walking round Liverpool with a small lamp attached to my forehead being filmed by an Austrian artist. I felt like a bit of a plonker, not being used to performing in front of camera but it was good fun.

I was one of 4 local artists chosen by the Austrian artist group and communication agency DIE FABRIKANTEN based in Linz. They are running a project called ‘Botschaft Europa’ a series of 5 European city night portraits.

We each had to visit 10 places and talk about them or introduce people, tell stories etc. It had to be at night, hence the headlamp, I’m afraid I probably finished well before the others as I didn’t have a lot to say and was getting tired by midnight.

I am pictured here (photos by Minako Ueda) at the Nerve Fundraising gig with another of the four, Tamasine Seibold and 2 video artists Michael and Miho.
I won’t see the final edited version for several months I think.

The Lights Are On

Call out to Warrington communities to take part in national creative...

Did You Work on the Dockers’ Umbrella?