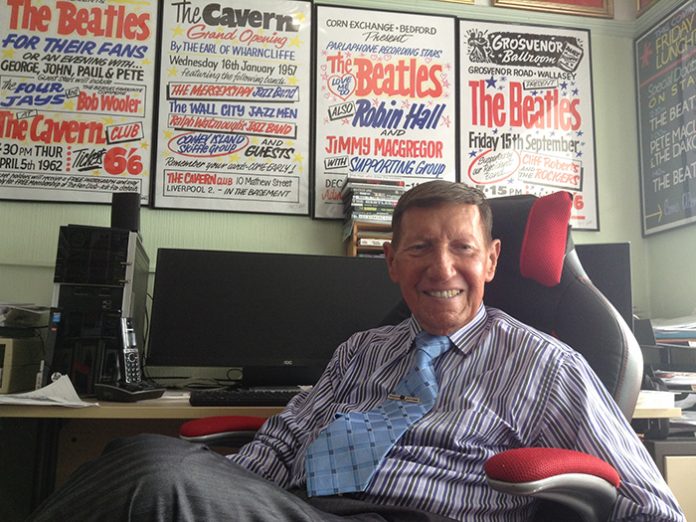 The man who helped put The Beatles on the map is holding his first ever exhibition, over 50 years after he played a key role in Liverpool’s pop history.

In the days before twitter, facebook, and social media, posters created by artist Tony Booth were the main way of telling fans of upcoming gigs by The Beatles and other stars of the 1960s Mersey Beat era.

Only a handful of the original posters produced in the hundreds by Tony in the 1960s have survived, with the vast majority discarded as waste paper once the gigs had taken place.

One Cavern Club poster, which Tony produced for a fee of “five bob” (25p) sold to an American collector in a London Auction House for £27,500.

“I never imagined in a million years they would one day be so valuable. I wished I’d kept some myself, but they were simply thrown in the waste paper basket,” said Tony who trained as a poster artist after leaving school aged 15.

Tony produced many hand-painted “sales” posters for the furniture business and record shop run by the family of Brian Epstein, the man who would become manager of The Beatles.

When Epstein’s interests turned to newly discovered stars like The Beatles and Cilla Black, Tony was paid to produce posters for gigs and concerts across the region.

“I must have produced many hundreds of hand painted posters for Beatle gigs and shows by other popular groups. I was only paid five shillings for each one, but it was non-stop work. I got to know Brian Epstein and The Beatles very well. It was great to be part of what was happening in Liverpool when Merseybeat was born, though we never knew how big it would become.”

Tony now spends every day at his Wirral studio producing replica posters for fans and collectors across the world. Recently he was commissioned by ITV Television to re-create the original posters that were always plastered all over the outside walls of The Cavern Club when it became the birthplace of The Beatles in the early 1960’s. ITV Television were producing a three-part drama based on the early life of Cilla Black played by award winning actress Sheridan Smith and they went to great lengths to build replicas of the exterior and the interior of The Cavern Club. They also built a replica of Brian Epstein’s office at Nem’s Enterprises, Whitechapel, Liverpool and Tony also recreated the gig-posters that Brian used to have displayed on his office wall.

Tony still hand-paints Beatles and other posters using the same materials and paper that he used over fifty years ago. He has already been commissioned by the famous Cavern Club to produce posters for their 60th anniversary in January next year.

He will be designing the anniversary poster in the same size and in the same style as the original poster he hand-painted for The Grand Opening of the club on 16th January 1957.

“It was a fascinating time to be around in 1960’s Liverpool with so much going on, and everywhere you looked there were my posters advertising the gigs,” said Tony. 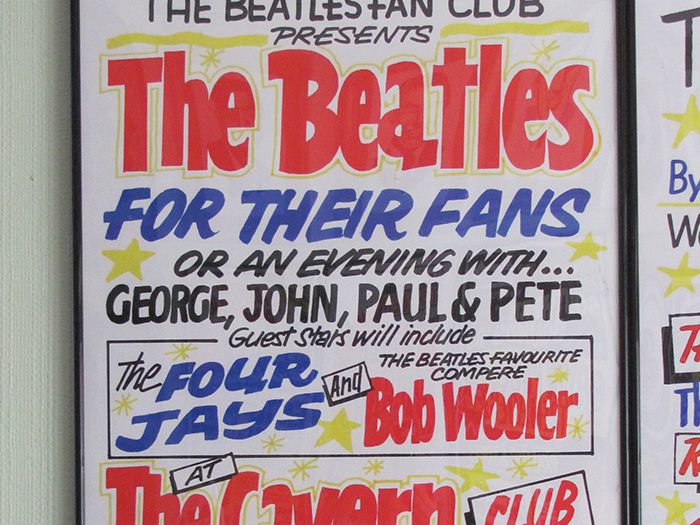