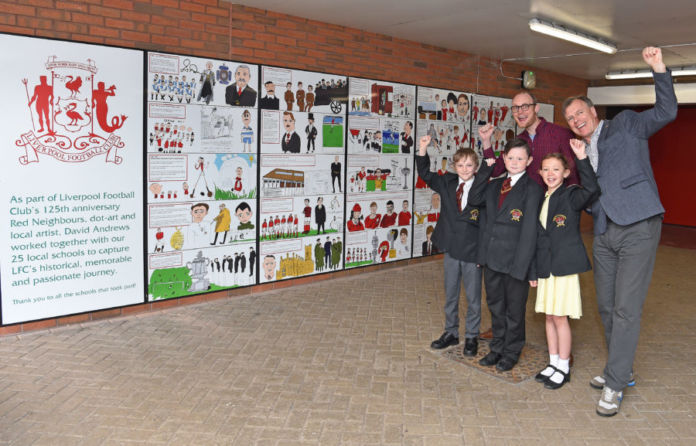 dot-art artist David Andrews and Liverpool Football Club have worked with over 500 local school children to produce a giant mural at Anfield, which commemorates the club’s 125th anniversary.

The seven metre long mural, which has been permanently installed onto the Kenny Dalglish Stand, has been created by hundreds of children from local schools that neighbour the stadium. All of the schools involved work closely with the club’s successful community programme, Red Neighbours.

LFC approached dot-art with the aim of commissioning a timeline artwork to reflect the club’s 125-year history. Local artist David Andrews was chosen to work with the schools to create the canvas. David said: “It’s an honour to know that the mural will be displayed at Anfield for all to see, for many years to come. The schoolchildren were brilliant, as were their illustrations – they should be extremely proud of what they’ve achieved.”

David and LFC’s museum curator, Stephen Done, ran art workshops at each of the 25 schools late last year. Each school was allocated a specific five-year period which Stephen told them all about, including what the club had achieved and who were the key figures of the time. David then helped the children to create drawings to represent their 5 year block. One design from each school was chosen to be incorporated into the timeline artwork, ensuring that the full 125 years were represented.

When assembling the full-sized mural, David scanned in a selection of the most poignant drawings and used a graphics tablet to add colour to the mural and ensure that it had a uniform style throughout and appeared in comic book style.

Karen Hutchings, head teacher at New Park Primary School, said: “The students loved the art workshops, and learning about how the club and the Anfield area has evolved in the last 125 years. This is the first time they’ve seen the final artwork, which combines pieces from all the local schools. They are so pleased with it and can’t wait to show their friends and family.”

Fans can find out more about the 125-year history of Liverpool FC by clicking here.