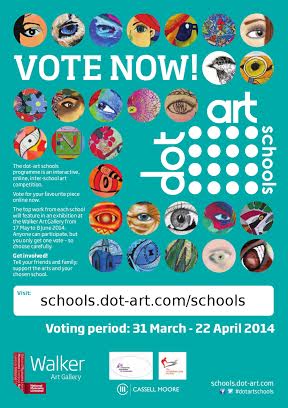 dot-art Schools, an inter-school art competition for year 6 and year 9 students across the Liverpool City Region, has announced a panel of judges who will create the shortlist of this year’s winners.

Beth Harvey, Project Manager of dot-art Schools, says “We’re so excited to have such a prestigious panel of judges, for the school children to have their work reviewed by such experienced people in the art world is a great achievement.”

Jenny Porter says “Its a real honour to have been invited to be a judge of the dot-art Schools competition. Having worked with the Liverpool Art Prize shortlisted artists over the past five years, its really inspiring to see the younger talented artists of Liverpool who may soon become future Art Prize winners. Good Luck to all involved”

But it’s you who gets the final say. Voting opens on the 31 March for the public to decide which artwork from each school will be exhibited in the Walker Art Gallery.

Over 1000 students from 46 Liverpool City Region Schools took part in the competition to see their artwork in the prestigious Walker Art Gallery.

Winners of the dot-art Schools’ art competition will have their work displayed among the Walker’s world-famous collection from 17 May to 8 June 2014.

Liz Cotton Partner, Head of Employment said “We’re thrilled to be involved with such a fantastic  competition.  dot -art have created a unique competition which will showcase a wide variety of classroom art  from school children across the region. It aims to nurture local talent and raise ambition which are values we at Cassell Moore hold dear.   We immediately saw the synergy between this and what dot-art aims to achieve each year with its competition.   This is a project which – even after this year’s winner has been chosen and announced – will leave a legacy in our city”

Free Crap Furniture from the A Foundation