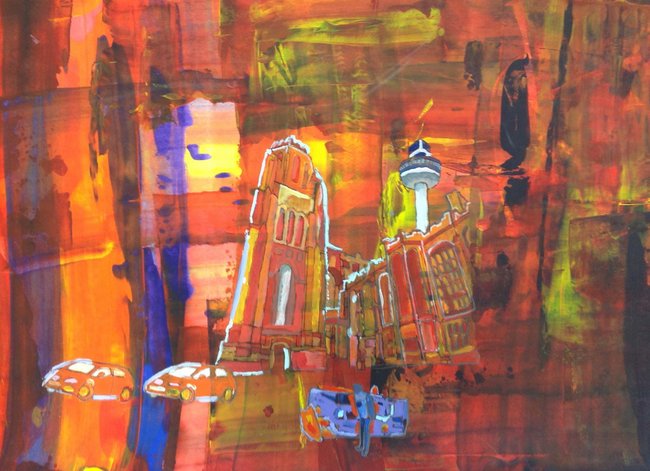 The winners of the 2012/13 dot-art Schools Competition were announced at a prize-giving ceremony at the Domino Gallery in Liverpool on 10 July 2013. As well as the overall winners, the top three students from each of the participating schools were all presented with a certificate by the Lord Mayor, Councillor Gary Millar.

The two runners-up were Isobel Shore from Gateacre School  and Jessie Lau from The Blue Coat School, who both won exclusive ticket’s to see Tate Liverpool’s Chagall Exhibition when the gallery is closed to the public.

The overall first prize was awarded to James Murphy, a year 9 pupil from St Margaret’s Church of England Academy. As well as tickets to the Chagall show, he also received a scholarship to dot-art, giving him a year’s membership to dot-art’s network, allowing him to showcase and sell his work alongside professional artists.

Lucy Byrne of dot-art said: “The selection of the overall winner of the first dot-art Schools Programme was an incredibly difficult process, as the standard of work submitted was absolutely fantastic. However, after much discussion, the judges agreed the James’s stunning painting “Urban” was a very worthy winner. The expressive use of paint, strong colour selection and striking composition combine to produce a truly impressive work of art. I am sure we will be seeing more of this talented artist’s work in the future.”

Lord Mayor of Liverpool Gary Millar added: “Well done to all these schools for taking part and inspiring the amazing young people to get involved… It’s not every school child who gets to see their work on the walls of a gallery!”

dot-art Schools is an annual, interactive, inter-school art competition, open to primary and secondary schools based in the Liverpool City Region, designed to nurture talent, raise ambition, and take art out of the classroom and into the real world. With the current threats to creative subjects on the national curriculum, dot-art Schools offers a way of keeping young people engaged in the arts, allows them to see a creative career path, and encouraging them to attend exhibitions outside of school.

Schools are each invited to submit 25 pieces of art work by students in year 6 and year 9, which are then subject to an online public vote. Over 380 entries were submitted this year, and can all be viewed online at schools.dot-art.com.

dot-art Schools is currently looking for both primary and secondary schools across the Liverpool City Region who would like to take part in the next programme, which starts in September. Teachers interested in getting involved can find out more and complete an Expression of Interest form on the dot-art Schools website: http://schools.dot-art.com/what

Information about entering the 2013/14 prize can be found here: schools.dot-art.com.

‘The Final Viewing’ as the View Two Gallery closes its doors