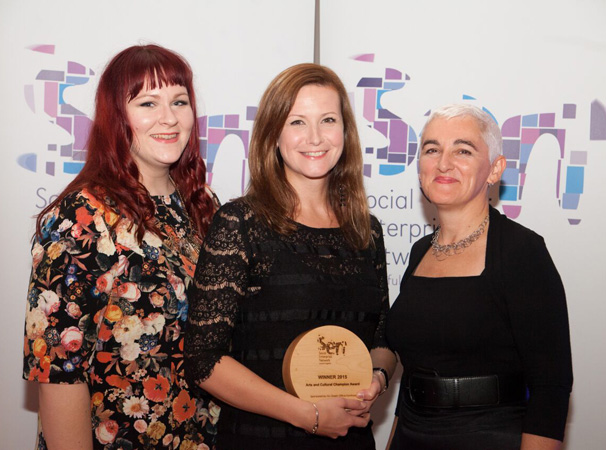 At a fabulous black tie event at Liverpool’s Town Hall last Friday, attended by the cream of the region’s social enterprises, dot-art Services CIC was announced as the Arts and Cultural Champion for 2015 by SENTogether, the Social Enterprise Network for the Liverpool City Region.

The SEN Powerful Together Awards recognise the Liverpool City Region’s most innovative social enterprises, for attributes such as creativity, growth and social advocacy. The annual awards have been taking place since 2012, and this year saw over 90 nominations received across all categories. The Arts and Cultural Champion award recognises the achievements of the creative sector in supporting communities to thrive through a range of creative mediums, and was awarded to dot-art in recognition of its varied programme of works in the visual arts.

Local visual artists can develop their careers and gain exposure and promotion for their work through its membership scheme. There are currently around 100 active members, with over 500 engaged since 2010. By joining dot-art an artist becomes part of a growing community, working in a broad range of styles and media, and at all stages of their careers. Members develop their own practice which enhances confidence, life satisfaction and overall health and well-being. Since 2010 dot-art services has also provided affordable, studio and workspace to over 30 artists.

dot-art also offers a range of adult art classes and courses, led by members. Participants tell us that they build confidence, increase skill levels, and meet new, like-minded people. Over the past four years, courses have provided regular paid work for 22 artist tutors and delivered over 5000 hours of teaching to almost 550 local people.

dot-art Schools is an interactive, online, inter-school, art competition, taking place on an annual basis and culminating in an exhibition at St Georges Hall. It is designed to raise ambition, nurture talent and help young people see a creative career path, especially at a time when the arts are being side-lined in the National Curriculum. It was set up in 2012 in response to demand from local schools; since then over 2500 children from over 80 Primary and Secondary schools in the Liverpool City Region have participated.

“The dot-art team are absolutely delighted to win this award. Over the past few years we have developed a number of new projects which have had fantastic reach and impact across the region; perhaps most importantly the dot-art Schools programme which has given thousands of children the opportunity to see their work showcased online, and displayed over 120 of these works in public art galleries in Liverpool City Centre. We have ambitious growth plans for 2016 and I am confident the profile gained by winning this award will help us deliver these.”

“I am very pleased that our judges decided to name dot-art Services the Arts and Cultural Champion for 2015. SEN has supported and championed their work for several years and has been impressed by their resilience, development and growth. Congratulations to dot-art on a well-deserved accolade!”

Anthony McCall and FACT to Create Massive Cloud Column on the...