“Digital Dockers’ Umbrella” will archive the oral histories of the Liverpool Overhead Railway into a Virtual Reality train ride.

Details of the project and how to support it here

“Digital Dockers’ Umbrella” will archive the oral histories of the Liverpool Overhead Railway into a Virtual Reality train ride through the past, working with Merseysides deprived children to capture the memories of those who remember it’s existence first hand and embedding this history into a state of the art digital experience anyone can enjoy.

What was the Docker’s Umbrella?

The Liverpool Overhead Railway (known locally as the Dockers’ Umbrella) was an overhead railway in Liverpool which operated along the Liverpool Docks and opened in 1893. The railway was a number world firsts; it was the first electric elevated railway, the first to use automatic signalling & electric colour light signals, electrical multiple units, and was home to one of the first passenger escalator at a railway station. It was also the second oldest electric metro in the world. 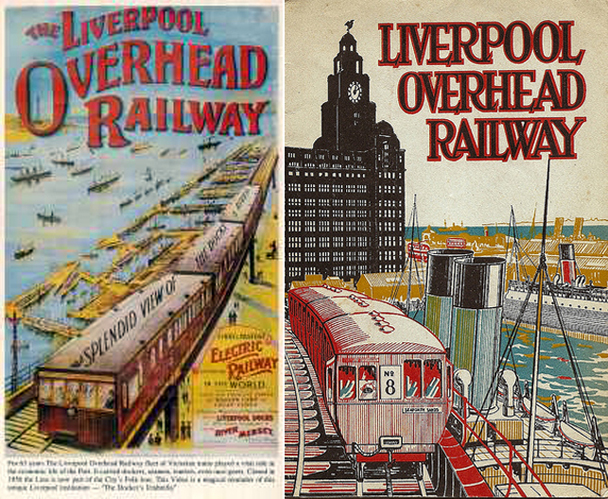 This railway connected the whole of the docks together; from Brocklebank Doc all the way to Toxteth, if you visited the docks you had the Dockers’ Umbrella in common. There is a wealth of first-hand knowledge in the memories of our local residents of this historic Railway, operating as a central means of transport for dock workers and even operating as a tourist attraction in it’s own right.

However, with the historic docks no longer what they were, there is a danger of the next generation who live along Merseyside will never know what it was like to ride the Liverpool Overhead Railway and thus will never fully understand what it meant to both the docks and to the whole of Merseyside.

Why remember the Railway?

The history of Liverpool Overhead Railway is crucial to an understanding of what made our community great. Many generations have toiled on the dock and remember the importance of this historic railway that exists no more. We are now faced with the challenging question: How do we get our local kids, some of the most economically deprived kids in the country, to take pride in their history and engage with the past they share with previous generations?

Who will “Digital Dockers’ Umbrella” work with?

The project hopes to engage three groups of young people from some of Merseyside’s most economically deprived areas with the historic importance of the Liverpool Overhead Railway in a way that will be attractive and exciting to them in the 21st Century. Bringing in industry experts in digital technology and local historians to educate and train them in the digital archiving skills necessary to film and record the history of the docks and the railway for themselves.

This project will enable use of the footage these young people create to build a virtual reality experience of riding the Liverpool Overhead Railway, incorporating oral histories of dockers who remember riding it themselves, union officials describing the docks past,  archived pictures and video showing what it looked like at the time as well as local historians expertise to bring the importance of this heritage landmark to life.

The immersive nature of virtual reality will get a generation of young people closer to the experience of riding the Liverpool Overhead Railway than has ever been possible before, generating pride in our shared heritage, archiving the histories of the men and women who worked all along these docks and celebrating the continuing importance of the Docks to the whole of Merseyside.

Just as Virtual Reality can transport you to mystical virtual locations in videogames, we will use VR to transport the people of Merseyside back to their own shared heritage and past. The completed VR experience will be freely exhibited in a prominent docklands location for anyone to make use of. Using historical documents and oral histories of the people who were there first hand, this will be an archive like nothing Merseyside has seen before!Find out how to support and donate to this incredible project here
Advertisement