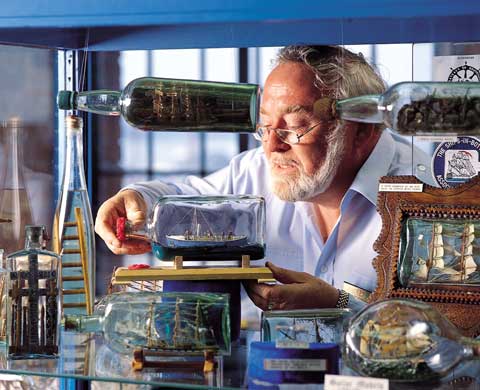 Des Newton, one of the world’s leading ship bottlers who also made ship models for the Royal family, has died after a long illness. He was 67.

Des was one of the best-known personalities at the Merseyside Maritime Museum where he had a ship bottling and model workshop for 20 years. He joined the staff as a craft demonstrator in1985 and soon became very popular, particularly with visitors attracted by the Tall Ships Races.

Dennis Newton, known as Des, was born in Barrow-in-Furness, Cumbria, the son of a seafarer. After his apprenticeship, Des became a welder working on submarines in the Vickers shipyard. The welding had to be of the very highest standards for submersibles and Des was always proud of being one of the select few trusted with the work.

Des left Barrow and worked for a railway carriage builder in Leeds where welding had only just replaced riveting and impressed the workforce with his skills. He later became a professional entertainer and musician learning his trade on the nightclub circuit.

This was time well spent because anyone seeing Des demonstrating his ship bottling skills knew they were in the presence of a great entertainer. A favourite routine was to get a child to blow down the end of the bottle at the same time raising the ship’s sails by secretly drawing on the strings. Even to adult eyes it seemed to be magic.

Des always jokingly referred to himself as a Glass Receptacle Miniature Artefact Inserter.

He appeared on television several times, most notably on Blue Peter and the What’s My Line? panel game.

Des had an intense interest in ship bottling and became a world expert and exponent through his studies and skills. He could quickly and expertly answer any question on the subject – and then demonstrate the solution.

He identified the world’s oldest bottle model made by Mathew Buchinger (1674-1740) which is part of a National Trust collection at Snowshill Manor, Gloucestershire.

Des – who lived in Bootle, Liverpool – supported Merseyside Maritime Museum at many exhibitions and events and this led to him demonstrating his skills at maritime festivals around the country. Even after retirement in 2004, Des was still in demand demonstrating his knowledge and skills on cruise ships as well as back at the Maritime Museum where he held his last workshop in September 2008.

Des was passionate about lifeboats and was a former crew member of the Barrow lifeboat and a RNLI life governor. He raised thousands of pounds towards the purchase of a lifeboat through running the annual Southport Model Lifeboat Rally.

The lifeboat, commissioned in 1987, was appropriately called The Modeler I. He then raised the money for a second D-type lifeboat Modeler II launched in 1989 and was duly rewarded by an invitation to the Queen’s garden party at Buckingham Palace.

This was not his only royal connection: Des made a model of the Royal Yacht and presented the model to the Queen when she visited Merseyside on board the Britannia in 1993.

It was one of Des’s proudest moments when he visited the ship to see his model on the dining room sideboard and then to find that the royal family kept it when the yacht was retired. He also made models of Royal yachts for Princess Margaret and Prince Charles.

Des was known as a genuinely open inspirational person, treating everyone with the same cheerful enthusiasm. Among his works in the Merseyside Maritime Museum collection are his model of the first Royal Yacht, the Mary, and several bottled ships.