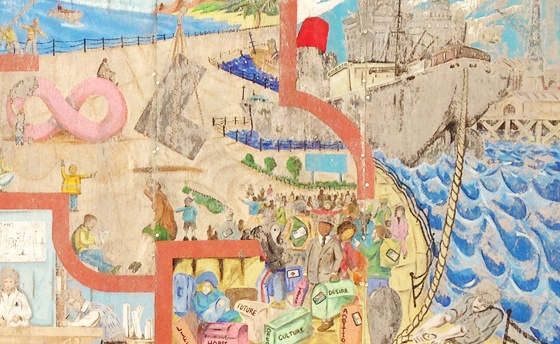 How does the study of the TV serial format, and binge-watching boxsets inform an internationally acclaimed arts festival? Liverpool Biennial, in preparation for the 2016 instalment of the locally located, yet internationally-motivated organisation seeks to demystify the thinking behind their curatorial decisions by inviting the public to “be part of the discussion” in a series of talks, the second of which occurred this Tuesday.

I have been lucky enough to attend both so far, and if nothing else, am delighted to know that Tate’s Artistic Director, and co-curator for 2016 Francesco Manacorda is a MASSIVE Family Guy fan and admits to watching the series back to back for hours on end. Seem irrelevant? Well somehow, this cartoon addiction has begun to inform his thinking around curating the mammoth exhibition, as we discovered at the Bluecoat a few weeks back when he and his colleague Raimundas Malašauskas opened up the floor to questions from the public after screening a clip from the show featuring Chris (let’s assume we all watch this) falling into a supermarket fridge and ending up in a version of A-ha’s Take on Me video.

So far so weird, right? Wrong. There is certainly method in the madness, and by opening up this platform for communication and allowing the public to feel involved in the bi-annual event that puts Liverpool firmly on the international art map, Liverpool Biennial’s curators have managed to engage us, and get us interested in something over a year in advance of it actually happening.

For last night’s event, scriptwriter Colin Muir took the floor and talked the eager audience through his theory of episodes, characters and narrative structures. An interesting evening of discussion ensued, as Colin guided us through a web of terms and their implementation in scriptwriting and producing television shows.

It is interesting that Colin was chosen to lead the discussion on this occasion. It seems the Liverpool Biennial are dedicated to reinventing and rejuvenating the festival (which has been going since 1999), and as such, invite experts in a range of seemingly unrelated fields to join the curatorial conversation, lead a workshop with staff and ultimately ensure that any decisions the organisation make are informed by a wider framework of ideas, narratives and external, unbiased opinions.

Although on the surface, this interrelation of disciplines and voices all contributing to the overall plan for the festival seems chaotic and at times far-fetched, the truth of the matter is that the curatorial team are thinking outside the box this time around, and things looks positive. By introducing an open conversation, in which (in theory anyway) anyone, from curators, to writers to Joe Public can get involved, Liverpool Biennial are making a promise to their audience: a promise to listen, digest and ultimately act on the advice of others – I wonder if this has been done before?

From allusions to Star Trek and the ‘three act traditional storyline’, to references to Law and Order‘s ‘procedural’ format, Colin Muir’s knowledge of scriptwriting and narrative structure made for a fascinating talk, and one that engaged (a potentially non-arts) audience with pop culture references, rather than alienating listeners with art jargon.
It is difficult to tell at this stage how exactly Colin’s input will influence Liverpool Biennial 2016, but many parallels were drawn between the format of an exhibition and the format of a television show, most notably, the effect of characterisation. But who are the characters in Liverpool Biennial 2016? Is it the artists, or the artworks? Perhaps it’s the city? Or maybe the festival itself? The Biennial has an international reputation, and this, like our knowledge of sitcom characters, is something that has been learnt by audiences over time; we know what to expect, we recognise continuity errors, and we know what the limits are.
Perhaps 2016 seeks to push those limits – an exciting proposition.
Watch this space to find out when the next insight into Liverpool Biennial 2016, 9 July – 16 October takes place.

Art on the move – commute in style!