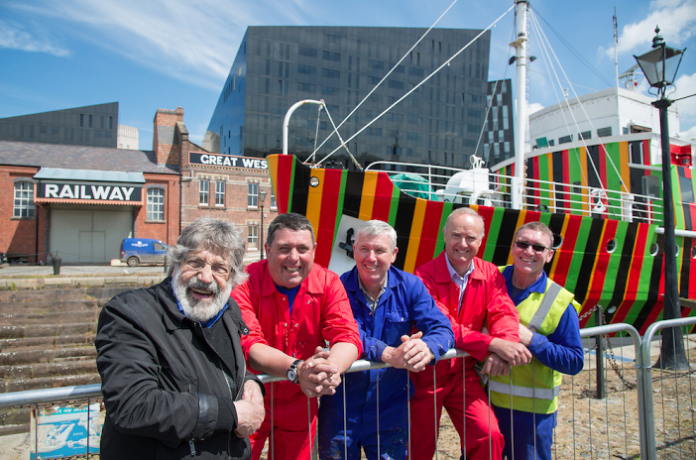 The vibrant ‘dazzle’ designs, which were used extensively during the First World War as a means of camouflaging war ships, are the inspiration for two spectacular art commissions in Liverpool and London this summer which are part of the 14-18 NOW programme to mark the centenary of the First World War.

In Liverpool, Venezuelan artist Carlos Cruz-Diez has worked with the idea of Dazzle using the historic pilot ship Edmund Gardner, to be launched today, as part of the Liverpool Biennial, and co-commissioned by Tate Liverpool. Conserved by Merseyside Maritime Museum, the ship is situated in a dry dock adjacent to Liverpool’s Albert Dock and will be a new public monument for the city.

In London, the HMS President (1918), which served as a Dazzle Ship during the First World War, will be ‘dazzled’ by leading German artist Tobias Rehberger. Co-commissioned with Chelsea College of Art and Design and Liverpool Biennial in association with HMS President, the work will be unveiled on 14 July 2014. Liverpool Biennial with Tate Liverpool and 14-18 NOW, the official cultural programme  for the First World War Centenary Commemorations, have co-commissioned the

Carlos Cruz-Diez said: “When I looked at Dazzle Ships they were artworks created for war and to avoid death, so I wanted to turn this into something reflecting the colour and energy of this city that represents life and light.” 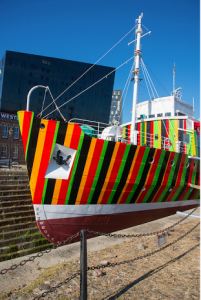 Sally Tallant, Director of Liverpool Biennial, said: “It has been a privilege to work together with our partners to commission Carlos Cruz-Diez to create a new public  artwork for Liverpool. That the ship has been painted by Cammell Laird’s painters has added to the sense of history and it has been fantastic to work with them to make this contemporary interpretation of a Dazzle Ship possible. We look forward to welcoming thousands of people to visit this new dazzling public monument.”

The ‘dazzle’ technique, immortalised in Edward Wadsworth’s 1919 painting. Dazzle-ship in Drydock at Liverpool, was undertaken and inspired by artists of the time. Wadsworth himself supervised the camouflaging of over 2,000 warships. Unlike other forms of camouflage, Dazzle works not by concealing but by making it difficult to estimate a target’s range, speed and direction. Artist Norman Wilkinson, credited with inventing the technique, explained that Dazzle was intended primarily to mislead the enemy: each ship’s Dazzle pattern was unique in order to avoid making classes of ships instantly recognisable to the opposition.

Liverpool Biennial’s Dazzle ship is part of Monuments from the Future: a new commissioning initiative between Tate Liverpool and the Biennial which invites artists and architects to bring large-scale imaginary monuments from the future into the present. In order to fulfil this paradoxical task, artists will collaborate with professional futurologists (social scientists who predict possible future scenarios) to determine possible future circumstances and set of events for which a new monument can be imagined and produced. This project will slowly turn Liverpool into a sci-fi sculpture park making use of Liverpool’s industrial archaeology to celebrate its possible new futures.

Art in the Fire Stations