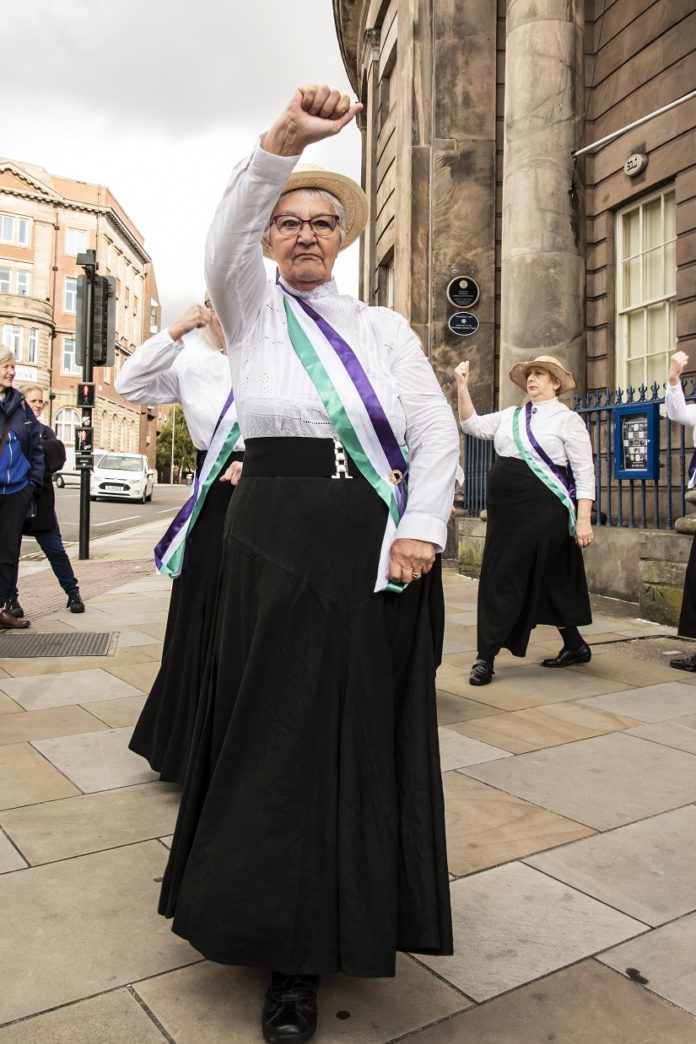 LEAP Dance Festival, one of the UK’s most anticipated dance festivals is officially launched with press and VIP guests attending the exclusive event at Liverpool’s Medical Institute.

With this year’s theme being suffrage, guests were welcomed in fitting style as performers staged a Suffragette-style protest outside the venue.

It was also an opportunity for guests to get a first look at the festival brochure which was hot off the press; detailing the full programme of events for 2018’s festival which returns to the city from 2 to 12 November. The festival will mainly take place at venues across Liverpool Hope University, Creative Campus.

MDI Artistic Director Karen Gallagher MBE said: “What a great evening; to partners, artists, funders and sponsors, thank you for helping us make this happen, it’s been no mean feat we can tell you, but so happy and proud to be able to share this festival with everyone. I would like to take this opportunity to thank the team at MDI who have been instrumental in ensuring that the work they do in terms of working with communities is integral to building curious and appreciative audience members, participants, creators and performers.  It’s a festival we are really proud of this year and hope as many people get a chance to engage with it as possible.”

Produced by MDI, the theme for this year’s festival is suffrage in a tribute to the suffragette movement celebrating 100 years since some women were first given the right to vote. In celebration of this, the festival will feature female protagonists in each of the dance performances, all of which are new shows to Liverpool.

The festival begins at the Capstone Theatre on Friday 2 November with Liz Aggiss: Slap and Tickle. This award-winning show is a dark and ribald physical comedy driven by content that embodies feminist dance practices, is framed by the politics that challenge and resist the ‘authority’ of formal conventions, revising attitudes towards mature female visibility

On Monday 5 November a cast of intergenerational women from Liverpool will perform Gaby Agis: Shouting Out Loud at The Great Hall with a soundtrack by seminal punk band The Raincoats. On the same afternoon Gaby Agis and Eva Maria Mutka will perform a duet entitled Close Streams.

The Warehouse Studio Theatre plays host to Jo Fong: An Invitation on Tuesday 6 November. An Invitation is an interactive and ever evolving piece of theatre that invites audiences to engage and develop the performance.

Over at the Capstone Theatre on Tuesday 6 November audiences will be treated to a double bill of dance in the form of Laila Diallo: In This Moment and Liz Roche: Wrongheaded.

On Thursday 8 November, Uchenna Dance: The Head Wrap Diaries will be performed at the Capstone Theatre.  Set in a South London hair salon called ‘BE U Tiful’, three fierce, clever and witty female characters take us through stories of community, heritage, womanhood, friendship, and most importantly, hair.

Olivier Award nominated Lost Dog’s new show Juliet and Romeo reveals the real story behind the classic love story at the Capstone Theatre on Friday 9 November. With Lost Dog’s blend of dance, theatre and comedy this duet takes on our obsession with youth and our inevitable issues with longevity. This evenings work will also include Audio Description and the company will hold a Touch Tour before the show goes up.

Enter the hypnotic world of MK ULTRA. Rosie Kay’s new work is a high energy, supercharged mash-up of thrilling dance, music and imagery. It is inspired by the bizarre realm of pop culture mind control conspiracies, taking a look at myth and popular culture on Saturday 10 November.

Made possible through a Festival Enhancement grant from Culture Liverpool, the festival concludes with Fagin’s Twist from Avant Garde. The untold story of Oliver Twist’s notorious villain comes to the Epstein Theatre on Monday 12 November, where Street dance meets Victorian workhouse as choreographer Tony Adigun imagines the childhoods of Oliver Twist’s villains

As well as the wealth of performances, for the first time MDI and Liverpool Hope University are staging Our Dance Democracy: Dance, Performance, Culture and Civic Democracy – a two-day conference that bring artists and academics together to look at the role of dance and performance in democratic discussions, and forging connections through culture.

The festival will mark the final year at MDI for Artistic Director Karen Gallagher MBE. Karen has championed the development of dance across the Liverpool city region for over 30 years and during her time at MDI has received a great many accolades and awards for her work in the region.

LEAP 2018 is part of the #Liverpool2018 celebrations which mark ten years since the city received the prestigious 2008 Capital of Culture title. Each production in the festival will be making their Liverpool debut meaning this the perfect opportunity for audiences to experience never before seen performances.