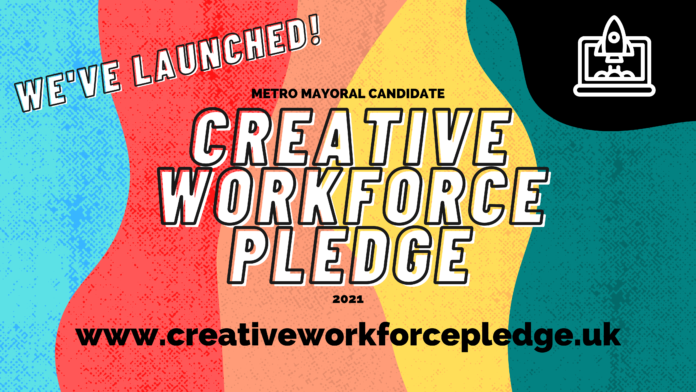 Working in partnership with ExcludedUK and the Federation of Entertainment Unions, Culture Commons are inviting all creative workers and culture lovers in Liverpool to join the national campaign. By visiting a dedicated campaign website, anyone can check if they’re in a metro mayoral race area and send the Creative Workforce Pledge to all candidates running to ask them to sign up – all at the click of a button.

Next month, more than 20 million people in England will be choosing city-region mayors in Liverpool City Region, along with Greater Manchester, West Midlands, Greater London, Tees Valley, Cambridgeshire and Peterborough, West of England and West Yorkshire.

Already vocal in his support for the pledge is one of Liverpool’s own, actor and director David Morrissey. He says: “We have seen in the past year how freelance creative workers have suffered because they slip through so many nets in our system. Please join me in getting creative workers higher up the agenda by asking your candidates running to be Metro Mayor to sign the Creative Workforce Pledge.”

Never has such a pledge been more important than now, as the pandemic has sent a wrecking ball through the foundations of this incredibly varied sector. The campaign is asking each metro mayor to stand up for the creative and cultural workforce.

Never has such a pledge been more important than now, as the pandemic has sent a wrecking ball through the foundations of this incredibly varied sector. The campaign is asking each metro mayor to stand up for the creative and cultural workforce.

The Creative Workforce Pledge calls for: a Culture Forum which brings together creative businesses, cultural organisations, networks and workforce representatives; nurturing the talent of local children, young people and adults so they have opportunities to access careers in the creative and cultural industries; regional investment for the creative and cultural sector as part of the government’s Levelling Up agenda; more decentralised decision making, putting power and control into the hands of local leaders; the launch of a national enquiry into the status of freelancers and the self-employed.

To value, respect and support everyone who is part of the creative and cultural workforce, whilst also spurring innovation, promoting diversity and making a positive social impact on health, well-being, education, inclusion and urban regeneration.

Culture Commons are asking creative and cultural organisations and high-profile individuals in the Liverpool City Region who’d like to lend their voice to this important campaign to be in touch at contact@culturecommons.uk