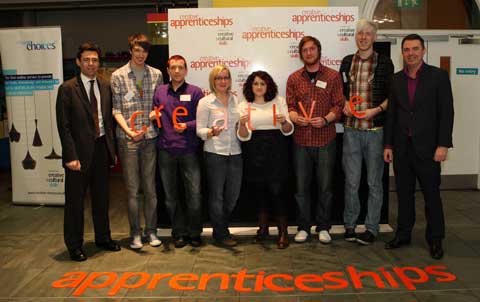 We didn’t manage to get to this event so I’ve posted the full press release. We have bumped into a few of the apprentices on out travels and they seem to be doing really well and enjoying themselves so lets hope the scheme continues.

SECRETARY OF STATE PRAISES SUCCESS OF CREATIVE APPRENTICESHIP WEEK AT LIVERPOOL’S WORLD MUSEUM
Andy Burnham highlights the success of the Creative Apprenticeships that will give young people the skills and experience to find work.

Creative & Cultural Skills – the Sector Skills Council behind the new apprenticeships – will host the event bringing together employers and apprentices from the creative and cultural industries throughout the UK, including those from Liverpool.

Ten Creative Apprentices were recruited in the Liverpool region in 2008 through a joint initiative between Liverpool Community College, Liverpool Arts Regeneration Consortium and Creative & Cultural Skills.

The apprentices in Liverpool will have the opportunity throughout their year long apprenticeship to work across and within a broad range of creative organisations. Andrea Nixon, Executive Director at Tate Liverpool, has led the consortium delivering the pilot scheme. The consortium is made up of Tate Liverpool, Liverpool Biennial, National Museums Liverpool, Royal Liverpool Philharmonic, Foundation for Art and Creative Technology (FACT), Unity Theatre, Everyman Playhouse and Bluecoat.

Creative Apprenticeships have received widespread backing from the creative and cultural sector throughout the UK. Major employers such as the National Trust, English Heritage, the London Transport Museum, The Sage Gateshead, the Royal Opera House and the Victoria & Albert Museum amongst others have pledged their full support and are in process of recruiting apprentices.

“Creating apprenticeships to allow young people to make the most of their talents and give them the skills they need to pursue successful careers is at the heart of all the work we are doing to make sure our creative industries and cultural sectors continue to thrive.

“I’m delighted that so many companies both here in Liverpool and across the UK have committed to making our aim of establishing 5000 Creative Apprenticeships by 2013 a reality, and I urge more to get involved. I want to make sure that everyone has access to the same opportunities so their creative ambitions can become a reality.”

“Creative & Cultural Skills developed the Creative Apprenticeships in partnership with industry to provide relevant, current, on-the-job training which is accessible to non-graduates from any background. These industries have no shortage of young people aspiring to work within them but it is vital that the opportunity is open to all and not just to those that can afford to gain unpaid work experience. In the current economic climate, it is more difficult for small and micro-businesses to take on apprentices but those organisations which have done so to date are a shining example of how employers can come together to develop and provide apprenticeships.

I call on the government to stand firm on its commitment in Creative Britain to implement 5000 creative apprenticeships by 2013. However, we must recognise that this will not happen simply because Whitehall has set a target. At least 1000 apprenticeships a year could be created by implementing the proposals Creative & Cultural Skills have already put to government. A new £10 million seed fund, taken from the additional £140 million the Prime Minster announced for apprenticeships in January, would help boost the take up of apprentices by cultural employers. For example, a wage support fund in the museums sector of £500,000 has already secured 50 new apprentices in England. It’s time now to back these bold and imaginative solutions.”

“It has been important to us that the national pilot of Creative Apprenticeships in Liverpool should begin in the city’s year as European Capital of Culture, a year that has showcased the great range of homegrown talent: from both the cultural organisations and the people of Liverpool. The eight major arts organisations, in conjunction with Liverpool Community College, have specially developed a Community Arts Management curriculum that will work across the different cultural organisations, but will also offer apprentices the opportunity to work across departments and disciplines. The curriculum will not produce specialists, but will instead train young people for work in areas as diverse as Front of House and Marketing.

Thanks to the support of the Paul Hamlyn Foundation ten young people have been a part of some landmark projects: over the last year some of our apprentices have visited the houses of parliament, while others have hosted a weekend-long event bringing together young people from Finland, Spain, France and the UK – and these are just a few of the highlights. Every member of the consortium is proud to watch their apprentices developing lifelong skills that will enable them to seek fulfilling careers in the creative sector – a true legacy for Liverpool.”

The launch of Creative Apprenticeships, the first officially recognised scheme for the creative industries, will ensure future employees are equipped with the necessary skills and knowledge required to be successful, whilst meeting the staffing needs of employers to ensure on-going success for their business and the creative industries as a whole.