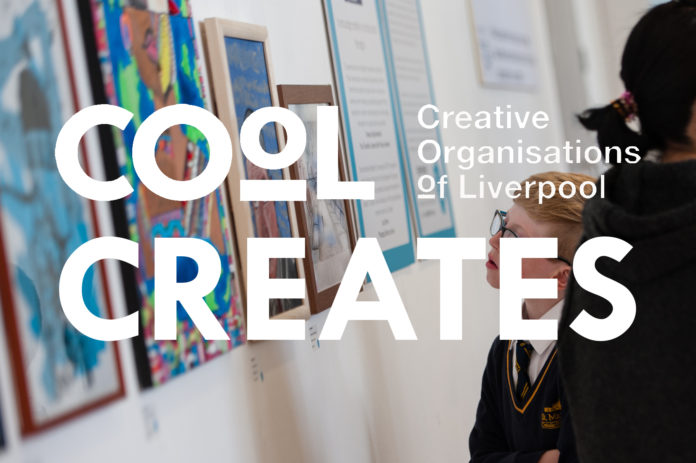 Liverpool arts organisations are uniting for three special days of creativity under the banner of COoL Creates. The first of the three days is especially for and by the region’s young people to celebrate International Youth Day.

The first of the four projects on display is the dot-art Schools showcase with artworks selected from hundreds of young people from 56 schools across the Liverpool city region. The dot art Schools pop up exhibition will be on display 11am – 5pm on College Lane in Liverpool ONE on Sunday 12 August. This annual inter-school art competition now, in its sixth-year, nurtures talent, raises ambition, and takes art out of the classroom into the real world. With the current threat to creative subjects in the national curriculum, dot-art Schools keeps young people engaged with the arts, allowing them to see a creative career path, encourages them to attend exhibitions and engage them with culture outside of school. Alongside this, dot-art have commissioned Liverpool based graphic artist Thom Isom to work with creative professionals, LJMU students and art and design organisations to design and produce a Creative Careers Poster which will also be launched on the day. This poster highlights the vast range of career paths for which creativity is integral, emphasising the importance of a creative education.

dot-art supports visual artists and champions art as an integral part of everyday life. They do this by selling locally sourced, affordable art from their city centre gallery on Queen Avenue, working with businesses to put art in the workplace and public realm, running art classes and working with schools and community groups.

The second of the four International Youth Day projects is from Open Culture, who invited Liverpool based composer and musician Jonathan Hering to create a special programme of piano performances by talented young pianists for Tickle the Ivories. Jonathan has been working publicly with music for 18 years. He currently works with Liverpool Philharmonic, Young DaDa Ensemble and Drake Music amongst many others. These special International Youth Day performances take place between 12noon – 3.30pm on the College Lane piano (near Waterstones), and will be a great opportunity to hear the incredible young talent from the region.

Open Culture first proposed Tickle the Ivories to Liverpool ONE back in 2011 and have been delivering it with Liverpool ONE ever since. Tickle the Ivories is now the North West’s biggest piano festival and sees 6 pianos placed around the Liverpool ONE annually throughout July – September, enlivening the Liverpool ONE streets with astonishing piano music made by performers and shoppers alike. Musicians and performers taking part in Tickle the Ivories have racked up millions of views on social media. Last year, 10-year-old Harrison Crane from Ormskirk (who will be performing on International Youth Day) drew a crowd with his rendition of I Giorni by Ludovico Einaudi; with over half of million people tuning in on Facebook too.

The third of the four projects is from The Windows Project, a team of poets will invite participants of all ages to throw a ball into the Amazing Push Poem Machine, and wherever the ball lands you’ll then be invited to write a word starting with the letter and then add it to the ever-growing giant community poem. You’ll find the Amazing Push Poem Machine on College Lane 11am – 5pm.

The Windows Project is a charitable trust, founded in 1976. Run by writers with over forty years’ experience of work in the community, the Windows Project provides opportunities for writers to train and work in a variety of local settings whilst engaging all ages, particularly children and young people in writing and poetry.

And the final of the four projects is Best in Show, a 10-minute street theatre performance created by ADAPT trainees from Hope Street Ltd. Best in Show will take place every 30mins between 12noon until 3.30pm by the Paradise Street Tickle the Ivories Piano (near Starbucks). Expect barking mad antics and Whippet whistling tunes from a cute and comedic company of dogs. The young ADAPT trainees have recently taken part in the 10-week Artist Development & Training Programme, working with a variety of theatre makers and practitioners, most recently the Liverpool based Egg People who are specialists in street theatre and family entertainment. The piece will be highly physical and engaging, and will be fun for all the family, especially for children.

Hope Street Ltd have been providing training, guidance and support to Liverpool’s emerging artists for the past 30 years. They will be wrapping up the business and closing their doors on 31 August 2018, following their last performance of Climate Change is Rubbish.  Best in Show is an additional special performance created by their 2018 ADAPT trainees especially for International Youth Day.

Heart of Glass launches Street Hunt, a treasure hunt based on...