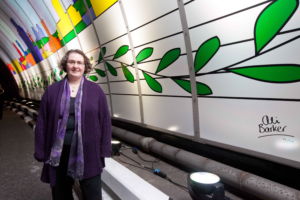 Alison, who completed her Art A Level at the College’s Art Centre last year, won Merseytravel’s (Merseyside Travel Authority) competition brief to design artwork for the interior cladding of the Queensway Mersey Tunnel.

Her artwork was a part of a £7 million refurbishment of the 78-year old road tunnel which took 18 months to complete.

Her designs are displayed on 18 panels at either end of the tunnel displaying interpretations of both the Liverpool and Wirral skylines. The Liverpool composition depicts the major buildings of the city, based photographs that Alison took at Seacombe.

The keyboard design below represents the significance of music in Liverpool life, each building above also corresponds to a note on the musical stave, which gives each building its colour from Alison’s own colour scale.

The Wirral composition features prominent buildings from Wirral. With the musical stave below again with the inclusion of a flowing design of the leaf of the bog myrtle, the plant that originally gave Wirral its name due to its growth on the peninsula.

The artwork Alison produced for the tunnel was adapted from an environmental art project she was working on for her A2 Level whilst at the College last year.

Maritime Park Gets Go Ahead