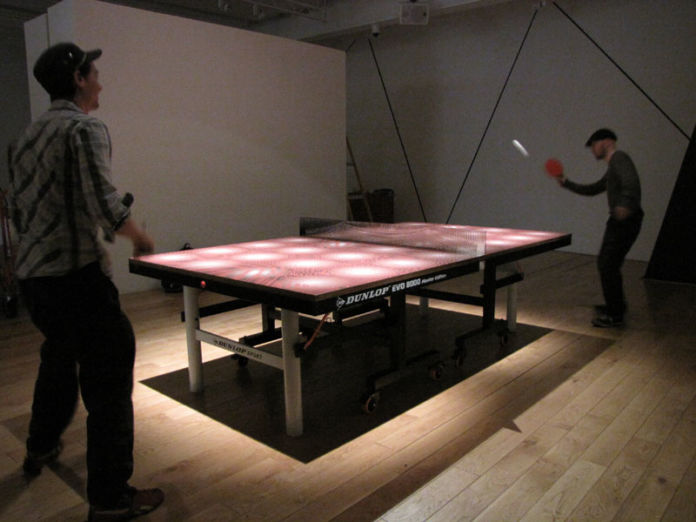 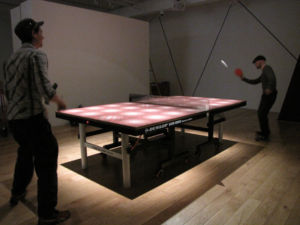 Will Nash’s Noisy Table arrives at FACT next week

Weekly ’tablehack’ workshops allow the public to adapt the artwork

Interactive artwork Noisy Table, an augmented ping pong table that will make music and sounds as games are played, arrives in FACT on December 6; and who better to test it out than some of the city’s best-loved bands?

As part of a special opening event, FACT will be launching Noisy Table with the start of the Bats and Bleeps ping pong challenge featuring some of the most exciting names on Liverpool’s music scene, including Clinic, Loved Ones, Afternaut, Organ Freeman, All We Are, Alpha Male Tea Party, Ninetails and Dogshow, in association with Bido Lito! magazine.

Clinic will take on Loved Ones for the first match of the tournament at 6pm on Thursday, December 6, before hanging around for an exclusive DJ set. Afternaut will perform live, and all bands involved in the ping pong challenge will be taking part in a round robin match.

Noisy Table is part of the FACT Connects programme strand, which seeks to attract new audiences and to engage with the local creative scene. Created by artist Will Nash, Noisy Table is programmed with a library of and samples. The vibrations created when the ball hits the table are turned into sounds, which are then broadcast live back into the game. Buttons at either end of the table allow players to scroll through the library and change the

Nash describes Noisy Table as “an alter-table-tennis experience” that breaks down traditional barriers of art.

And it’s not only rock stars who will be able to play and programme the sounds of Noisy Table. It will be available for public play from 12pm to 6pm daily (11am to 6pm on Saturdays) and outside of these times can still be used if players bring their own bats and balls.

Weekly ‘tablehack’ events themed around Noisy Table will start from Thursday December 6, allowing local artists and hackers to customise Nash’s creation by patching in their own sounds, or by hacking the Arduino, MIDI and Logic elements of the table that create its unpredictable soundscapes.

The tablehacks will be co-ordinated by artist Ross Dalziel, and local creators and makers including DoES, HIVE and MadLab have been invited too.
More details of times, dates and themes are available on www.fact.co.uk.

Noisy Table is supported by Dunlop Table Tennis and funded by Arts Council England. It will remain in the foyer for the duration of the Winter Sparks exhibition, until February 24 2013. See