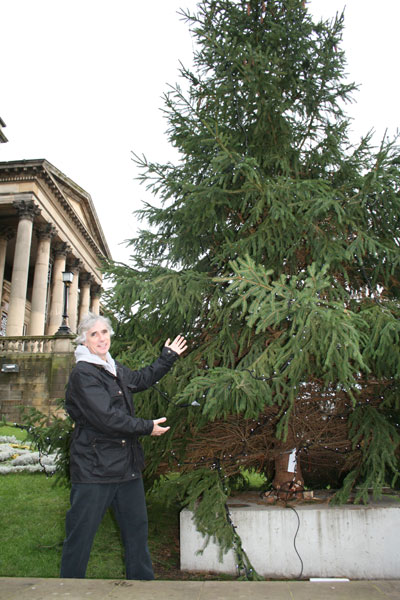 Phil Redmond has launched the festivities by presenting Christmas trees to World Museum and The Walker Art Gallery.

National Museums Liverpool was not going to buy trees this year as part of budget cuts until chairman Phil and wife Alexis stepped in. The couple offered to fund two trees and make sure both venues are all set for the festive season.

At World Museum a 30 foot spruce now stands proud while the Walker now has a 20 foot tree. They have been decorated with 2,500 lights

The two plinths which support the trees could be used longer term as exhibition spaces in their own right. Planning is at an early stage but the two bases could be used similarly to the fourth plinth at Trafalgar Square which was the focus of Antony Gormley’s “One & Other” project last year.

Professor Redmond said: “In these difficult financial times, it would be tempting to ‘cancel Christmas’ – but National Museum Liverpool’s increased visitor numbers seem to indicate that people value our free admission venues. And rather than divert core museum funding, Alexis and I wanted to fund the Christmas trees. Not only that, but the plinths installed to support the trees will be available as exhibition spaces all year round.”

£27m boost for Liverpool from its cultural organisations