I was going to mention this public artwork when it first appeared last October, I took a couple of snaps but then it disappeared. The scaffolding needed strengthening apparently. Now its back and meanwhile I met up with the artist, Moira Kenny who has sent me these pictures and the full story.
The posting is longer than usual for this blog but do please read the full article, its fascinating. 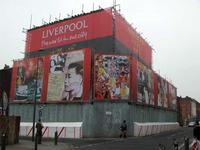 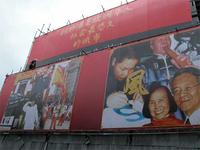 I work with ideas.
As a Liverpool girl I spent my childhood exploring derelict buildings and air raid shelters in the TA barracks on Aigburth Road and playing on the Cast Iron Shore fondly known as the Cassey. While I was jumping over rafters and crawling down holes, my mother thought I was at Mass or safely playing in Dingle swings.
I had and have as a visual artist a fascination with the city, the new and the old, the buildings and their roots below the ground.

At a very early age I was aware of territories. I was born into and live in a City that has unseen boundaries, districts, religion, race, a City that lives by its own limitations.
At the age of 11 I was chased out of tenements with my sketch pad and pencil I wanted to capture the intimacy of the people in comparison to the scale of the buildings with the landings and the doors and the washing hanging from lines. I was a good runner.

At University I was criticised for big ideas, disappearing into the City instead of making use of the studio. I wanted to wrap a building like Christo, I wanted to cover derelict spaces with words and images. Think Jenny Holzer, Barbara Kruger.
I was criticised for working with the familiar as I based my work on the City and migration and settlement of the people, setting myself limitations when in fact I was crossing boundaries.

Three or four years ago I started working in Chinatown as a base and invited other artists, writers and architects, property developers and health professionals to meet and discuss the movements of people, art regeneration, questions were raised such as What is a museum? Is it something static or something we move through? Why put art inside a building why not project it onto a building use technology or use the frontage of the buildings to enable people to take in the images as they work or live, shop or stagger past? And why is Chinatown in Liverpool just half a street of decaying buildings? And why do funders ask us “but you’re not Chinese…