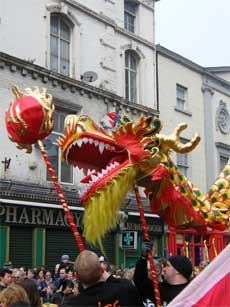 YEAR OF TIGER ROARS IN TO LIVERPOOL

Liverpool is to host an extra special Chinese New Year party this weekend to celebrate the 10th anniversary of twinning with Shanghai.

The twinning celebration, which comes less than three months before Liverpool heads to the World Expo 2010 in Shanghai, will be a traditional blessing ceremony to mark the 10th birthday of the largest Chinese Arch in any Chinatown outside of mainland China – at 12 noon on Saturday, 20 February 2010.

The following day Liverpool’s Chinatown area, which will be dressed in red with Chinese style flags and special lighting, welcomes in the Year of the Tiger with the spectacular fire cracker display at 1.00 pm at Great George Square (at the end of Nelson Street) a key highlight.

A whole host of other eye-catching events will be displayed along Nelson Street, Berry Street and Duke Street area, including live music and a fun fair while educational activities will be held at The Blackie. (Liverpool’s Chinese New Year programme can be downloaded at www.lcba.net)

St. Luke’s Church, on Berry Street, will also be rejoicing in the celebrations, with Urban Strawberry Lunch inviting the public to decorate the war damaged building.

In the evening, the VIP and Chinese Variety Show will be hosted at Britannia Adelphi Hotel. This year’s theme is ‘East meets West’ with an amazing line up of cultural and artist entertainments including: the Pagoda Chinese Youth Orchestra and traditional and contemporary artists from Wah Sing Chinese Community Centre.

Roll Up for the Magical Memory Tour