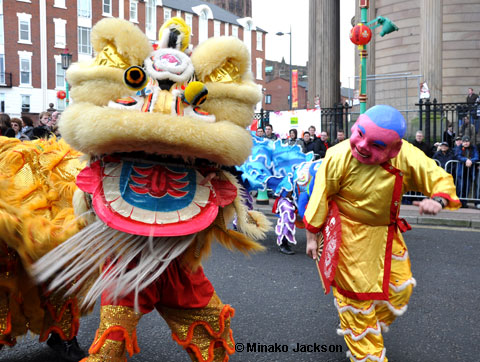 Liverpool is hosting an extra special Chinese New Year party this weekend to celebrate the 10th anniversary of twinning with Shanghai.

The twinning celebration, which comes less than three months before Liverpool heads to the World Expo 2010 in Shanghai, took place at noon today. It was a traditional blessing ceremony to mark the 10th birthday of the largest Chinese Arch in any Chinatown outside of mainland China.

The main public celebrations take place from around 11.30 on Sunday 21 February in the Berry St, Duke St, Nelson St area.

Liverpool Chinatown Arch scheme started in 1992 and formed part of the Liverpool Ropewalks Partnership initiative. The local Chinese community chose the design through a competition. The Shanghai Linyi Garden Company Ltd manufactured the components which were assembled rather like a huge jig-saw and shipped to Liverpool in five large containers.

A team of 20 craftsmen – especially selected for this project – including stone masons, stone carvers, painters and construction engineers travelled from Shanghai to Liverpool in October 1999. The total work program for the Arch was completed in less than 90 days.

The Archway was the star attraction in Liverpool’s Chinatown for the first Chinese New Year celebrations of the Millennium when in February 2000 the Year of the Dragon was celebrated.

Liverpool is the only city from the UK to be showcased at the Shanghai World Expo 2010. For more information please go to: www.liverpoolshanghai2010.com On Michelle Wren – by Tim Birch