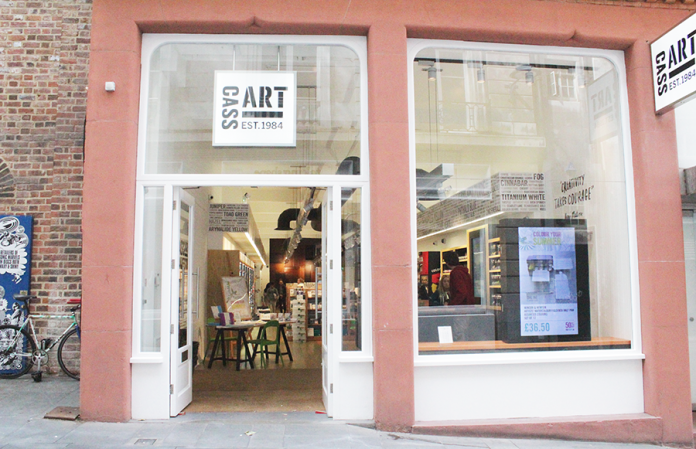 With Cass Art’s notorious Student Day hitting Liverpool for the first time this Tuesday, we take a look at how the new kid on the block has been settling into the art scene up North. On 6 October, visitors to the store armed with a valid student ID can expect 15% off all products, a free goody bag worth up to £40 and free treats courtesy of the Bluecoat.

It’s hard to imagine that it’s only been six months since Cass Art launched their first North West store here in Liverpool. Being a small chain (although they wouldn’t call themselves a chainstore), the brand experienced a tentative welcome to the city upon first arrival, so it’s great to see now how Cass Art Liverpool is making waves by working together with local organisations and businesses.

From collaborations with Independent Liverpool, to partnerships with FACT, the team behind the London-born brand have worked hard to integrate themselves with the city’s key players so far. And this is entirely in keeping with the ethos of the company; not only do Cass Art pride themselves on refraining from direct competition with other local arts suppliers (Liverpool based stores can breathe a sigh of relief), they only hire artists to work in their stores. So when it was announced that the store was to open on School Lane, it was a surprise to see so many opposed to the idea – how can employing local artists in an environment that can directly benefit their practice, without seeing the closure of other art shops be a negative thing?

Back when the store first opened in Spring, I went to welcome the new team. For store manager Adam, Cass Art is all about the process of making, encouraging people to get creative and try out new things. Every member of staff has a different specialist area; from illustrators to screen printers, the breadth of artistic disciplines represented within the team is fantastic, and they also offer training and workshops in store.

People are at the heart of the company, according to Mr Cass himself, who told me “we’re here to add to the community, and bring artists and creatives into the city centre”. His aim for each of his nine stores is to make art (and the accompanying products and supplies) accessible to all – “we make the art of the accessible possible” he says, be that via low prices, knowledgable staff, or the welcoming landscape of the shop itself.

And what of the location? It’s no coincidence that the store is situated a stones throw from the Bluecoat. The first shop opened nearby the National Gallery in London, and by anchoring themselves next to a local institution here in our city, the hope is to draw in arts enthusiasts and become a lifelong part of the arts community, especially amongst students. According to Mr Cass, arts degrees recently went through a phase of being more theory than anything else, but in a renaissance of hands-on experimentation, ‘doing’ is back at the centre of the curriculum and that’s where Cass Art comes in.

And the best part of the Student Offer this week? You don’t have to be a first year, or ‘fresher’ to reap the rewards! Students at any stage in their education are welcome, and even if you’re not an art student, you’re sure to find some stationary worthy of your Geography coursework in store.

Find out more about the Student Day and other events and promotions coming up at Cass Art here.