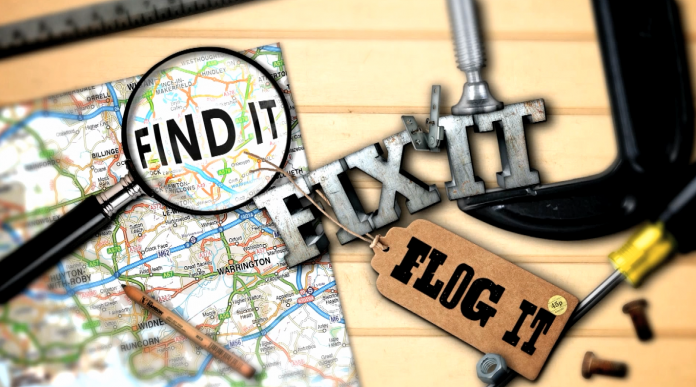 Across the UK, millions of pounds worth of neglected treasures lie buried and forgotten in the homes of Britain. From rusty motorbikes to tarnished teapots, ancient tractors to antique furniture, what looks like junk can actually be worth a pretty penny.

Find It Fix It Flog It follows presenters Henry Cole and Simon O’Brien as they journey across the UK, meeting property owners and throwing open their properties to explore the unique items lost inside.

In a series full of light-hearted banter and friendly competition, Henry and Simon dig out the very best finds and using some creative thinking and a lot of elbow grease, fix them up in order to turn a profit for their owners.

Upcycling genius Simon and his restorer Gemma Longworth, from Liverpool’s Button Boutique, love turning everyday objects in to fantastic furniture, while for Henry and his mechanic, Guy, it’s all about restoring retro relics and vintage classics. From transforming a galvanised metal cold water storage tank into a modern coffee table, to turning a 4ft whiskey barrel into a funky and contemporary seat, our “sultans of scrap” will show you just how easy it can be to breathe new life into old or unwanted items.

As the world land speed record holder for a pre 1955 750cc motorcycle, Henry rides every year for Brough Superior and Gladstone on the Bonneville Salt Flats to try and secure a whole load more. Alongside his love for all things mechanical, Henry is passionate about fishing, cycling and – most importantly – his wife Janie and his two sons Charlie and Tom.

Simon O’Brien is an actor and presenter as well as a successful property developer. Born and brought up in Liverpool, Simon began acting in 1982 and appeared in Brookside for five years from the very first episode. He then went on to live in LA where he appeared on the network NBC sitcom Out All Night. Returning to the UK he has fronted many shows including To Build Or Not To Build (BBC); The Sealed Bid (Channel 4), The Renovation Game (Channel 4) and My Dream Derelict Home (UKTV). For several years he also presented the Breakfast Show for BBC Radio Merseyside and Saturday Wake Up on Citytalk. When not on TV or radio, Simon splits his time between developing and shooting independent films and scouring Europe seeking out derelict properties to renovate. This is all totally hands on as by his own admission he is a perfectionist so he can’t stand by while someone else does the job half as well. He is currently battling with Snowdonia National Park Authority in order to restore a 300 year old watermill using the traditional waterwheel to create electricity and keep the property entirely off grid. And when he’s not on the road, he’s usually found busy at work in his very own “man cave” on his latest upcycling project.

LOOK/17 holds a week of events at Tate Exchange