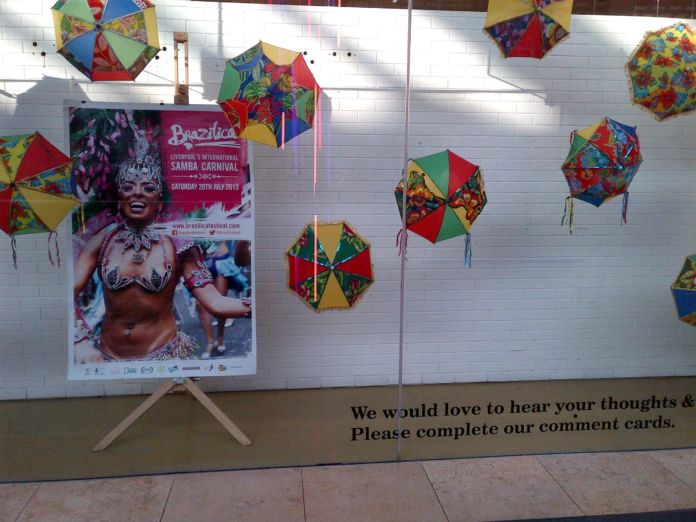 Last night (Thursday 11 July) I was lucky enough to witness the launch of Brazilica 2013 with the preview of the exhibition Frevo Drop.

At a VIP party in the Metquarter, the exhibition was unveiled: a collection of 30 stunning, illuminated Frevo umbrellas all completely hand-painted in bright carnival colours and curated by arts collective Braziliality.

The exhibition takes its name from Frevo, a Brazilian style of fast-paced carnival music, which, we were proudly told by our South American host, is so distinct to the north east region of Perambuco that it is recognised by UNESCO as a cultural asset to the region. The umbrellas are a traditional part of the Frevo performance, and can be traced back to the 19th century, when rival bands would compete whilst on parade.

The event launched the festival in style, as we were treated to a live samba demonstration from Liverpool Samba School, accompanied by a local drum band. The performance was electric and really set the bar for next week’s carnival through the streets of Liverpool. 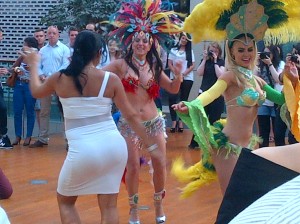 Speaking to the dancers, I found that they are all incredibly excited about next week’s Carnival Queen Competition, as well as Saturday’s street carnival itself. For most of the performers, this is their 3rd or 4th year as part of the event, showing how important the festival has become to our city’s calendar.

Also on display at the Metquarter throughout carnival week, are some of the wonderful costumes designed for the festival. The collection is extraordinary; artistic, incredibly detailed and excessively glamourous, we got a sneak peek of what to expect to see on Saturday 20 July.

FACT Announces New Chair of the Board