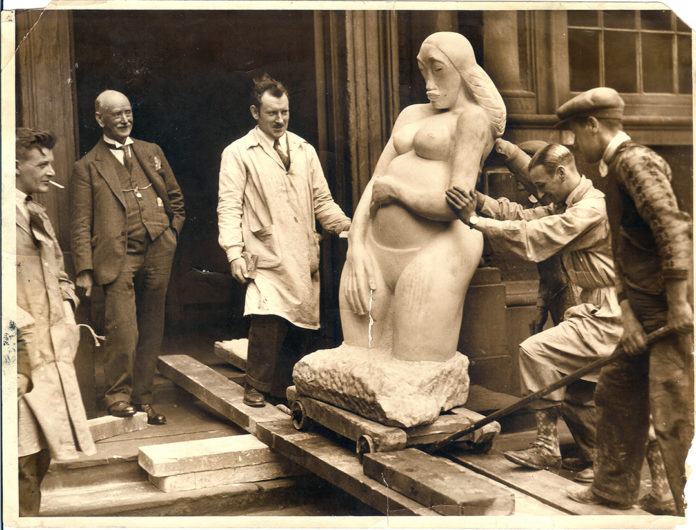 Bluecoat has launched a 4 week crowdfunding campaign to help transport Jacob Epstein’s Genesis back to Liverpool, 86 years after it was first exhibited at Bluecoat in 1931. The sculpture, loaned by The Whitworth Art Gallery in Manchester, will be the centrepiece in Bluecoat’s final 300th birthday exhibition, In the Peaceful Dome, which opens on Friday 13 October.

A dramatic marble sculpture of a heavily pregnant woman, Genesis attracted considerable controversy when first exhibited in 1930, and it has an important place in Bluecoat’s history. 86 years ago, the Bluecoat Society of the Arts, as custodians of the building, struggled to finance the building’s upkeep. Members of the Sandon Studios Society, based in the building at the time, suggested loaning Epstein’s sculpture as a means of generating much needed income, as well as bringing a key work in British modernism to a Liverpool audience.

As a result, Genesis first arrived at Bluecoat in 1931, amidst great controversy and interest. It attracted crowds of 49,687 people, who all paid sixpence to see the sculpture. The exhibition generated over £1,000, a considerable sum in the 1930s.

When the sculpture first arrived in 1931, the building entrance was not ramped, so a makeshift one was created from wooden planks and the sculpture wheeled in on a trolley. In contrast, today Genesis requires highly-specialist transport to move it safely and securely, which comes at a premium cost, and there are other costs Bluecoat needs to cover in order to help keep In The Peaceful Dome a truly special exhibition which is free for all to attend.

Bryan Biggs, Artistic Director at Bluecoat, said, “We can’t wait to bring Genesis back to Liverpool after 86 years. It’s a really important part of our history and had such an impact in the city when first shown. It will be a fitting finale to our 300th anniversary programme, which has seen special exhibitions and events throughout the year. We are especially pleased to have the opportunity to present Epstein’s work to new audiences as part of In the Peaceful Dome, and hope people get behind the campaign to support the exhibition and the display of this important sculpture.”

The campaign runs until 5.30pm on Monday 9 October, with Bluecoat offering a series of rewards in return for helping with their campaign.

To donate or find out more about the campaign visit the crowdfunding page at http://www.crowdfunder.co.uk/bluecoat-genesis