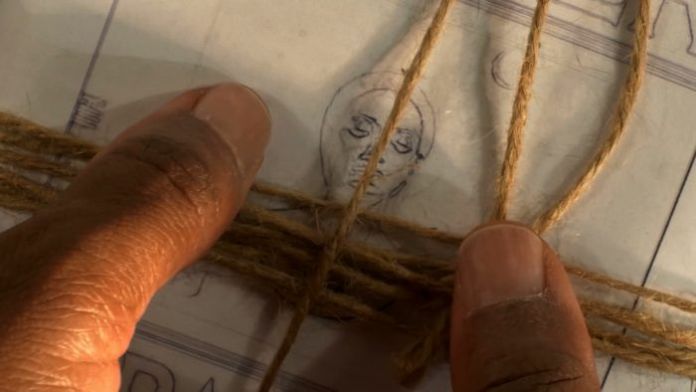 This October, artist Keith Piper will return to Bluecoat, Liverpool’s centre for the contemporary arts, with a major solo exhibition presented in partnership with Iniva (Institute of International Visual Arts).

Unearthing the Banker’s Bones (28 October 2016 – 22 January 2017), will comprise three new large-scale works spanning installation, digital works and drawings that address current anxieties about the impacts of globalisation. It will be the most substantial presentation of the artist’s work in nearly two decades and celebrates the longstanding relationship between Piper and the two institutions which began over three decades ago.

Lending its title to the exhibition, the centerpiece of the show will be a new Arts Council Collection 70th Anniversary commission comprising of three synchronised high definition video projections, which depict a narrative of economic and social collapse — Unearthing the Banker’s Bones (2016). Drawing on extracts from apocalyptic works by Octavia Butler and Mary Shelley, the film employs a science fiction device which invites viewers to imagine the excavation and dissection of modern life from a future point in time. Alongside the film, ‘physical evidence’ such as ledgers belonging to the banker of the title, will be displayed. These objects play off against the unfolding narrative of the film.

After premiering at Bluecoat, Unearthing the Banker’s Bones (2016) will become a permanent part of the Arts Council Collection where it will available for loan to museums, galleries and other spaces nationally and internationally.

Speaking about the commission, Keith Piper said: “Unearthing the Banker’s Bones is a work emerging out of a period of research into science fiction as a space in which metaphors around social, racial and class anxieties are played out.

“Weaving together references drawn from a diverse range of classic novels, films and other texts, I am attempting to employ visual montage to play with notions of landscape and history painting, to devise a narrative played out across a triptych of video screens. The story that unfolds will be one of exploration, excavation and autopsy as a way of examining the present from an imagined future.”

Other highlights of the exhibition at Bluecoat include Robot Bodies, Piper’s 1988 seminal interactive digital work – updated and re-programmed for this exhibition – in which the robot, android and cyborg are examined as metaphorical carriers of contemporary anxieties around racial difference; and a series of mixed media works on un-stretched canvas, ‘future projected history paintings of the present’, that reference 19th century history painting and have been commissioned by Bluecoat and Iniva.

Unearthing the Banker’s Bones is a continuation of the social and political concerns that have informed Piper’s practice, from the very beginnings of his career as part of Britain’s BLK Art Group in the 1980s. The group fought to raise the profile of black artists through exhibitions and conferences, a contribution whose significance is only now being recognised in the development of 20th century British art. Other artists associated with the group included John Akomfrah, Eddie Chambers and Marlene Smith.

The collaboration between Bluecoat and Iniva in bringing the exhibition to fruition celebrates the close relationship that both institutions have had with Piper since the start of his career in the 1980s.

Piper first exhibited at Bluecoat in Black Skin, Bluecoat in 1985. He returned in 1986 as part of New Contemporaries (which later went on to become Bloomberg New Contemporaries), when Bluecoat’s Artistic Director, Bryan Biggs, was a selector, and again in 1992 with the groundbreaking commissioned project, Trophies of Empire.

Iniva first worked with Keith Piper on his first major solo show Relocating the Remains in 1997 and it toured internationally. It was accompanied by a monograph of the same name with a significant essay by renowned art historian Kobena Mercer. Later, Iniva and Piper collaborated on the Keith Piper Club Mix, a digital media intervention in nightclubs across the UK. He has also featured in a number of key Iniva exhibitions and publications including Boxer (1995) and Exiles, Strangers and Diasporas (2008).

Bryan Biggs, Artistic Director of Bluecoat, said: “Keith’s association with Bluecoat dates back to 1985 with Black Skin, Bluecoat and continued through significant projects like Trophies of Empire in 1992, so it has been a pleasure for us to work with him again to bring Unearthing the Banker’s Bones to fruition. We are especially pleased to be bringing the Arts Council commission to Liverpool for its debut, where Keith has exhibited many times before.

Melanie Keen, Director of Iniva, said: “At this moment in time, artists who challenge and renew people’s perceptions of diversity and globalisation are more needed than ever. Iniva supports artists at different moments in their careers, providing guidance and opportunities to present new work. Iniva has had a close relationship with Piper since the start of his career and I’m particularly thrilled to collaborate on this major exhibition as one of my first achievements as Iniva’s new director.”

Jill Constantine, Head of the Arts Council Collection, said: “Eight new artworks, in total, have been commissioned by some of the most celebrated artists living and working in the UK today and will be on shown across England during 2016 before becoming a permanent part of the Arts Council Collection. These works are available for loan to galleries across the country and will enrich their own programmes. It has been a real pleasure to work with the artists from the very beginning of the process and with institutions like Bluecoat and Iniva to bring these commissions to fruition.”

Unearthing the Banker’s Bones will continue into January 2017, marking the start of Bluecoat’s 300th anniversary programme.  Also showing at Bluecoat from 28 October 2016  – 22 January 2017 will be Adham Faramawy: Janus Collapse (the juice-box edition), which explores how identity is constructed in the 21st century.

Keith Piper at Bluecoat
1 of 4