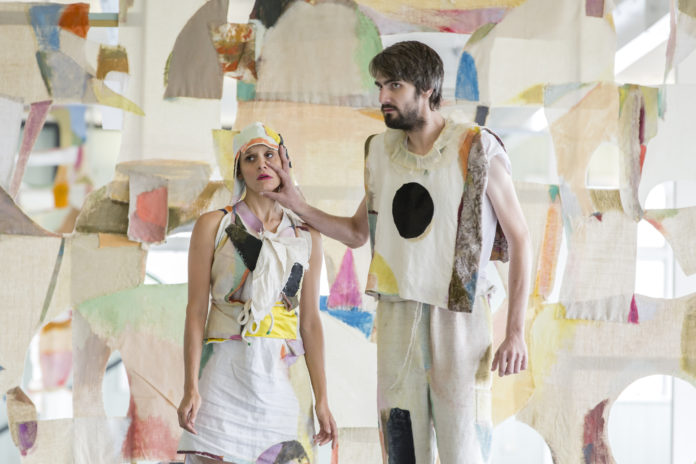 In 2019 Bluecoat, Liverpool’s Centre for the Contemporary Arts, will launch a series of exhibitions, residencies and events looking to the future of artistic practice.

Highlights include a major new exhibition with American artist Alexis Teplin, solo exhibitions with Shezad Dawood and Grace Ndiritu and the group exhibition Survey in partnership with Jerwood.

Alongside the exhibitions will be a programme of artist residencies, as part of Bluecoat’s commitment to supporting and developing artists at all stages of their careers. International artists including Nurrachmat Widyasena (Indonesia) and Chinar Shah (India) and British artist Suki Chan will be joined by artists from Liverpool as we launch Residents, a new programme supporting artists working locally to Bluecoat.

In April, Bluecoat will host Survey, a major study of new work by early career artists from across the UK. The exhibition is the largest review of contemporary art practice in Jerwood Visual Art’s 12 years of programming, spanning a breadth of disciplines including film, performance and painting. 15 artists have been nominated by 35 established and mid-career artists, including Ryan Gander, Andy Holden and Rachel Maclean.

Survey will tour to BALTIC in Gateshead later in the year.

The first four chapters of Leviathan premiered at Venice in conjunction with the 57th Art Bienniale. The work has developed, adapted and grown across exhibitions and screenings in Wales, Netherlands and Italy before reaching Bluecoat for a major exhibition charting Dawood’s ambitious project.

Grace Ndiritu’s The Ark is an experimental scientific and spiritual community, which formed for 8 days at Les Laboratories Aubervillers in Paris in 2017. Ndiritu’s living experiment drew on the artist’s own experiences of living in New Age communities. The group focused on creative thinking and radical new ways of thinking about life, society and the problems of the 21st century. At Bluecoat, Ndiritu presents the findings of The Ark and presents their creative output, such as costumes and banners from a closing parade through the streets of Aubervillers.

Born in Birmingham and based in Brussels, Grace Ndiritu is a British-Kenyan video artist and performer who, in her works, refers to the issue of race and identity as well as to problems connected with transformation of contemporary world after decolonization including, in particular, the impact of globalisation and aggressive geopolitics.

Ndiritu took the radical decision in 2012 only to spend time in the city when necessary, and to otherwise live in rural, alternative and often spiritual communities, while expanding her research into nomadic lifestyles and training in esoteric studies such as shamanism, which she began over 16 years ago. Her research so far has taken her to both Thai and Tibetan Buddhist monasteries, permaculture communities in New Zealand, forest tree dwellers in Argentina, neo-tribal festivals such the ‘Burning Man’ in Nevada, a Hare Krishna ashram and the ‘Findhorn’ New Age community in Scotland. Her research into community life has so far resulted in the founding of The Ark: Center For Interdisciplinary Experimentation.

Ndiritu has been included in the group exhibition In the Peaceful Dome at Bluecoat in 2017 and her work was also selected by Sonia Boyce for inclusion in her exhibition Like Love at Bluecoat in 2010. In 2018 Ndiritu launched COVERSLUT© a new ‘Pay What You Can’ fashion label focused on democracy & class struggle, that involves working with refugees and migrants.

A new body of work by U.S. born artist Alexis Teplin will premier at Bluecoat in October, in her first major UK exhibition. Teplin’s work crosses between painting, performance and film. The artist draws parallels between the process of these art forms. Fragments of abstraction within her paintings combine to suggest glimmers of figuration; whilst in her performance and film work, a similarly piecemeal assembly of quotes and gestures ranging from personal aphorisms to grand theatrical gestures, from the Labour manifesto to the films of Fellini.

Following on from her enchanting installation The Bell Tree which saw the artist instal over one hundred ceramic mushrooms with accompanying soundtrack in the ancient woodland in March 2019 Serena Korda launches a second sound work, Under the Rose at Liverpool’s Speke Hall. Also commissioned by Bluecoat and the National Trust’s Trust New Art programme, this new work is inspired by the house itself, a tudor mansion adapted by the Victorians. Under the Rose or ‘Sub Rosa’ means ‘in secret’ and references both the symbolism of the rose and how ceiling roses were often placed in locations indicating that secrecy needed to be upheld. From priest holes for hiding Catholic clergy to eaves for servants to eavesdrop for their masters and mistresses this piece brings the architecture of listening in the house to life. An extract is available to listen to: https:// serenakorda.bandcamp.com/releases On site the artist invites you to then enter the courtyard of the building to experience the piece while standing next to Adam and Eve – the giant Yew trees at the centre of Speke Hall.

Under the Rose can be experienced alongside Korda’s The Bell Tree which launched in September 2018 and continues to 28 July 2019.

Indonesian artist Nurrachmat Widyasena arrives in residence at the Bluecoat in January. Widyasena will be examining the national mythologies of space travel in the run up to the 50th anniversary of the moon landings. Widyasena will be producing print works as well as making research visits to the National Space Centre and Jodrell Bank.

Widyasena lives and works in Bandung, Indonesia. He graduated in 2013, majoring in printmaking arts at ITB Faculty of Art and Design. His work has been exhibited widely in Indonesia and South East Asia, including exhibitions in Singapore (Mizuma Gallery and the

We are excited to be collaborating with London based artist Suki Chan on her new interdisciplinary project, A Conscious Life which brings together the diverse, subjective perspectives of scientists and ordinary people, who each have their own compelling story about individual and collective awareness and the nuances of what it means to be alive in a technological age.

A Conscious Life includes a strand of research about dementia and Chan is one of a number of artists invited to work in Belong Villages – villages set up to allow those on a dementia journey to live the fullest and most social life possible. Her residency is part Bluecoat’s embedded Where the Arts Belong project supported by the UK wide Celebrating Age, a fund established by Arts Council England and Baring Foundation specifically to support innovative approaches to engaging older people with the arts.

The artist will show the outcomes of her research at Bluecoat early 2021 in a major solo exhibition.

Suki Chan is a London based artist and filmmaker. Chan uses a range of media including installation, moving image, photography and sound to explore our perception of time and place. Her immersive, mesmerising film works draw the viewer into a cinematic ‘elsewhere’, investigating memory, subjectivity, belief and knowledge systems.

Chan’s practice is research-based and features dialogues with specific communities such as commuters, skaters, meditators, ophthalmologists and scientists. She has filmed in diverse locations and sites including contested sacred sites in the Middle East; Senate House Library in London; Hagia Sofia in Istanbul; and rammed earth roundhouses in Yunnan province associated with her Hakka heritage in China.

Bluecoat will host two artists from the CreArt network, a partnership of 12 European cities for a one month residency. Whilst in residence the artists will meet curators, writers and artists in the UK and develop new work. Last year, Bluecoat hosted Gwénaëlle Petit from Rouen and Petra Mrša from Zagreb.

Following on from the first part of her residency in 2018, Chinar Shah will rejoin Bluecoat from Bangalore, India in May. Shah will be developing research in the public spaces at Bluecoat as well as across digital platforms. Shah’s work responds to economic and social injustices, particularly in India, and her research at Bluecoat forms part of the wider Interrogating Intersectionality research group with Liverpool Hope University, FACT and Christ University Bangalore.

Born in Ahmedabad and based in Bangalore, Shah is known for her photographic works, which often spill over into online platforms such as eBay. Shah also works as a curator, exploring the potential of exhibition making in domestic settings. The artist is course leader for Photography at Srishti Institute of Art, Design and Technology, Bangalore and is also known for her writing on photography. She co-edited Photography in India published by Bloomsbury in 2018. She has exhibited in solo exhibitions at Mumbai Art Room, Mumbai in 2017 and G159, Bangalore in 2015. Shah has exhibited in group exhibitions including shows at Galleri Box, Gothenburg in 2018, Tate Liverpool, Liverpool in 2015 and Max Mueller Bhavan, Mumbai in 2013.

In October Bluecoat will launch Residents, a new programme aimed at supporting artists

living and working in the city. Residents will include mentoring, study groups and exhibition opportunities. Further details will be announced later in the year

Lancs Cricket Continues at Aigburth until 2008 (at least)