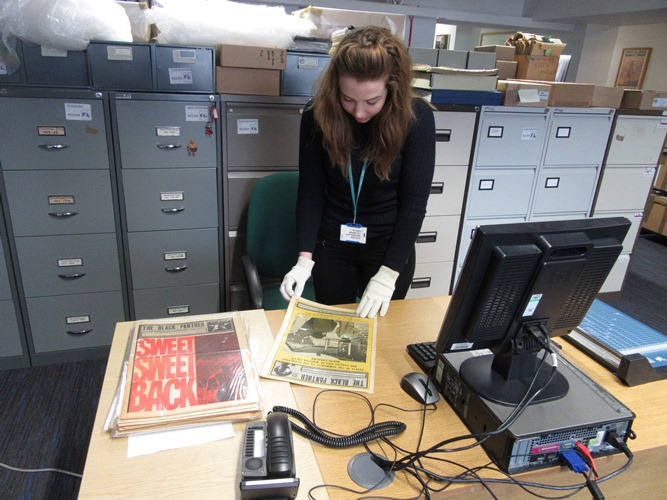 October is the 50th anniversary of the founding of the Black Panther Party and Black History Month in the UK. So, what better time to announce our acquisition of twenty one copies of the ‘Black Panther Intercommunal News Service’ than today?

Here, Rebecca Nelson, who’s on a student placement with the International Slavery Museum, blogs about these newest additions to our collection, and how you can see them:

“2016 marks the 50th anniversary of the founding of the Black Panther Party. Infamous for their revolutionary rhetoric and somewhat militant values, the Black Panthers sought to improve the situation for Black communities in America during the 1960s, 70s and 80s. From disillusionment with the civil rights movement, the founders of the Black Panther Party sought to raise the profile of Black rights via decisive, sometimes violent, action- they saw themselves as an army of the people, giving a voice to those who didn’t have one.

“For the past month I have been at the International Slavery Museum on a student placement. One experience that has really stood out for me is the work I have been doing documenting twenty one copies of the ‘Black Panther Intercommunal News Service’ which have recently been acquired by the Museum.

“These newspapers are really interesting documents, spanning the time period when the Black Panther Party was at its peak, from 1968 to 1972. During this time, approximately 300,000 copies were sold weekly and reached a global audience. The newspaper was founded by the Party in 1967 to inform, educate and organise its members. Each issue contains very similar stories- mostly these include strongly worded accounts of violent clashes between the Black Panther Party and its opponents, stories of arrests and reports from the trial’s of various members, and intellectual articles about political theories.

“Something I was surprised by though, which contradicted most of what I knew about the Black Panther Party, was the high number of articles which focussed on the community initiatives provided by the Black Panthers during this time. There are many reports about bussing programmes for Black communities. There was also a nation-wide breakfast programme, guaranteeing Black children at least one meal a day for free. Education is another frequently discussed topic, with the Black Panther Party taking an active interest in the provision of and access to education for Black children. In addition they set up community medical centres and welfare boards which campaigned for improved housing facilities.

“The Party was constantly working towards a Ten-Point Programme- the details of which were printed in each issue of the newspaper. The tenth point in the programme was ‘We Want Land, Bread, Housing, Education, Clothing, Justice And Peace’. In achieving this, they ruled, they would have secured for the black population of America, ‘the separate and equal station to which the laws of nature and nature’s God entitle them.’ So although known for being a radical and aggressive movement, the Black Panther Party had a very active social conscience, evident from these newspapers.

“These newspapers then are important documents in challenging the stereotypes of the Black Panther movement in America, as well as preserving some of the challenging legacies which developed from the system of enslavement in the United States.

“They can be seen in the Archives at the Merseyside Maritime Museum.”