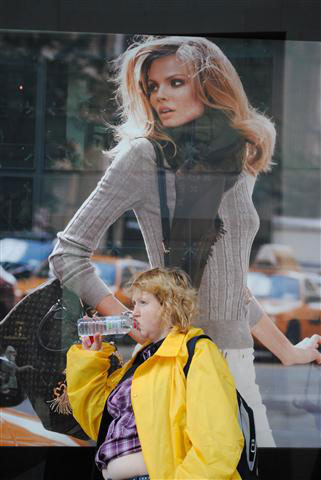 BUDDING photographers in Liverpool are being invited to get behind the lens and snap up a prize in a Photomarathon Challenge, organised by The Big Issue in the North Trust.

The event, on Saturday 16 July, welcomes photographers of all abilities to enter and have a chance to put their work in the spotlight, as well as winning prizes that include cameras and studio workshop sessions. 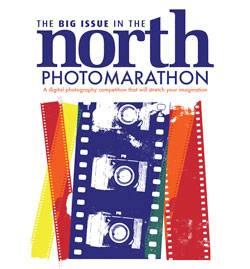 A Photomarathon is a photography competition with a twist: over the course of one day you take pictures on 8 given topics. It’s not your equipment that matters but your sense of improvisation, fun and creativity that is valued most throughout the competition. The topics are kept secret until four are revealed at the start of the event and the remaining few, four hours later.

The Liverpool event will be based at Studio 2, where volunteers will be stationed to download photos as they are submitted. From 10am entrants have four hours to snap the first four topics before returning to base in person, where they must have an entry card stamped before receiving their next four topics at 2pm.

Prizes include an E-PL1 camera, and a Diana F+ camera with flash, generously donated from Olympus and  omography; a studio workshop session (use of studio equipment under supervision) courtesy of JJM Studios; and 2 free tickets to a gig of choice – including a photographer pass – from The Masque venue.

The first Big Issue in the North Trust Photomarathon ran in Manchester last year and it was a great success with over 100 people taking part, raising over £700. The Trust hopes that by running the event in Manchester and Liverpool even more people will get involved and more money will be raised to help support vendors of the magazine.

Last year’s topics included things like ‘Your Number’, ‘Childhood’, ‘Darkness’, ‘Inclusion/Exclusion’, ‘Jealousy’ and ‘The End’. Some of the entries can be seen at www.biitn.org.uk. This year’s themes will offer photographers plenty of room for interpretation and creativity – you can work on your own or as a team to make your unique representations of the categories.

Local photographer Jen Kweeday, who has organised this year’s Liverpool Photomarathon, said: “I was delighted to be asked to organise the Liverpool Photomarathon and I hope that it is a huge success. We have already received so much support already from Studio 2, our judges and the sponsors who have donated prizes. I am hearing that participants are looking forward to the day and can’t wait to take part.”

While the final judging is taking place Jen has arranged for local band The Midnight Ramble to play an acoustic set to entertain the competition entrants. “We want to create a laid back atmosphere and to entertain the crowd while this is happening. The Midnight Ramble are an up and coming band who are receiving rave reviews and have kindly offered their time to our event.” (www.themidnightramble.com)

The Photomarathon will take place on Saturday 16 July from 10am – 6pm at Studio 2, Parr Street, Liverpool. To enter and make your donation go to www.justgiving.com/BIITNphotomarathonliverpool

Poolside Emergency at The Bluecoat