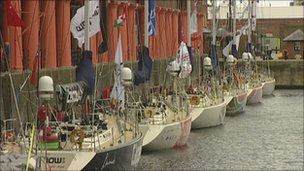 Talks are under way to decide if an alternative event can be staged instead of the cancelled Liverpool Boat Show.

Discussions between Liverpool council and local partners have started to see if another event can be arranged.

MIE will have no involvement in any new plans.

Max Steinberg, chief executive of Liverpool Vision, said: “We have already started to consider what we can do to minimise the economic impact of the cancellation of the Liverpool Boat Show.

FACT Book: Human Futures: Art in an Age of Uncertainty