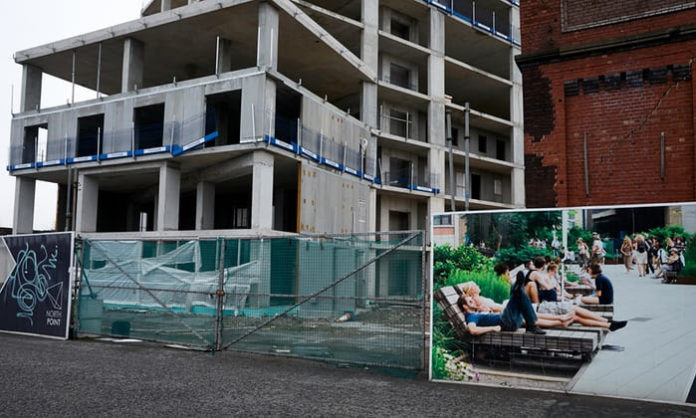 A response to the recent news that proposed ‘residential development’ will see the loss of Baltic Triangle green space “Twirling Trees” and the closure of Constellations.

Our culture is still for sale and this fact is made most clear in our city with the continued news that cultural venues and limited green spaces must make way in favour of new developments.

Rewind to 2015 and we were talking about the closure of stalwart venues Nation/Cream and The Kazimier. More recently, it was threats to independent venue Kitchen Street. Now, Constellations’ time has come – its lease is up and the venue isn’t part of the developer’s plan after 2019.

Sadly, we know that the land has only become viable as a ‘development opportunity’ because of the last five years of work done, community built and joy shared in The Baltic Triangle.

The Baltic is now a vanguard of culture and creativity in Merseyside, but was once a desolate red light district wedged between L1 and L8.

A recent census done by the Baltic Triangle Area CIC found that more than 3 million visits were made here over the course of just one year. That’s a huge crowd contributing a huge amount of money to our economy by visiting well-loved venues. We know people travel from outside the city just to visit the area.

This should be a proud time to look back at what’s been achieved. It’s now an internationally recognised example of what culture and creativity can do to change the spirit and face of a place. It should shift the conversation not to ‘how do we build over this?’ but to ‘how do we build on this?’.

To ensure the area’s continued success, this would mean taking bold action like re-opening St. James Street train station so even more people can get to our great cultural space. Instead we’re having to ask questions like ‘what’s happened to the £5.24m collected between 2010 and 2016 from developers as part of their legal obligation to fund open spaces, trees and public art?’.*
*[Source: Liverpool City Council: informationrequests@liverpool.gov.uk]

The latest development plan includes the destruction of Twirling Trees, made famous for their inclusion in the 200 Biennial programme, and a publicly owned green space. The Baltic Triangle Area CIC sees this green space as key gateway for the re-opening of St. James Street station.

There has to be a better mix of uses of space in the Baltic; including more innovative schemes from landlords like Baltic Creative CIC, which puts any profit back into the area itself. We need to find ways for independent collectives of co-ops to purchase land and develop their own spaces, before the value of the land dictates that the only return on investment is to build a skyscraper with small residential apartments.

There also has to be a plan to quench the city’s thirst for affordable housing, but we have to provide homes that don’t come at the expense of closing our greatest cultural assets. There are an estimated 3,000 empty houses dormant in our suburbs, so where are the plans to bring areas with boarded up windows back to life, rather than taking the life out of the places we work and play?

It’s clear that what isn’t needed is ever-shrinking studio apartments, like those that have already started appearing in the Baltic Triangle, some leaving visible scars as developers like Baltic House go bust.

Equally as important as having places to live is protecting the reasons people want to live there. If Liverpool is successful, for example, in convincing Channel 4 to open a new creative hub or locate its headquarters in the city, it will be a decision brokered on our vivid cultural identity.

These big decisions are about winning the hearts and minds of staff, with the offer that their children will go to good schools, and that families can enjoy affordable, fulfilling lives. Infrastructure and connectivity are criteria that other city contenders will be able to make the case for, too. So it must be about what makes Liverpool stand out – and that’s what’s under threat with developments that lead to the closure of venues like Constellations.

The government in Westminster expects our city to live on the money collected from business rates and council tax by 2020, so the need for development appears to be a beast that must be fed at any cost. But this destructive planning is a short-term gain at the expense of a long-term, sustainable vision.

Mayor Joe Anderson recently said that culture is “Liverpool’s lifeblood” and we get £12 back for every £1 spent. If so, it’s time to be more protective of the culture we have so we continue to realise that return.

That means protecting the assets we have, creating an environment for more to be built and investing in the necessary infrastructure to support this, such as the re-opening of St. James Street Station, and supporting creative groups to purchase land and assets.

Liverpool City Region establishing a Music Board is a great first step and should be applauded for endorsing the recommendations of The Liverpool Music Strategy report that came out of the Liverpool Music City? event convened by Bido Lito! and LJMU at Constellations last year. This challenged people to think about what more can be done to build on our past glory and present success.

But live music is just one part of the diverse cultural offer the region has and all of this needs more support. The Liverpool City Region draft Culture and Creativity Strategy seems disconnected from reality – telling us very little about plans for protecting space and place from the very real challenges highlighted by this news.