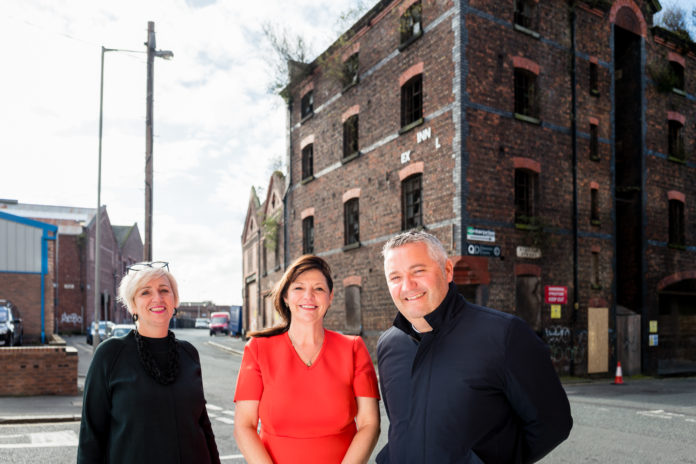 Baltic Creative Community Interest Company is set to embark on its next phase of development after completing the purchase of a historic 19th century docklands storehouse in the Baltic Triangle, Liverpool. The four storey red brick warehouse located at 61-65 Norfolk Street and adjoining two storey building on Simpson Street have been acquired from Liverpool City Council on a 125 year long lease hold.

Currently in a poor state of disrepair, Baltic Creative will undertake a 10-month restoration programme to sensitively refurbish the buildings and create a further 17,000 sq.ft of flexible modern workspace.

K2 Architects has been appointed to design the scheme which will feature a variety of different sized studios alongside collaborative breakout areas, meeting rooms and co-working space. The ground floor will also include a public café with events space and outdoor green area.

The ambition is to develop the Baltic Triangle’s first digital technology hub, which is expected to attract companies working in growing markets such as VR, AR, IoT, eHealth, FinTech, MADTech and Big Data. Once established the scheme will support circa 30 companies and 150 full time jobs.

Baltic Creative CIC has secured £2.6m investment from The Charity Bank and European Regional Development Fund in order to deliver the scheme, which will start on site in November 2017 and is expected to be ready to let by September 2018.

Baltic Creative CIC has worked closely with Liverpool City Council, DCLG (ERDF), HCA, The Charity Bank, Safestore and Excello Law over an 18-month period in order to complete the complex acquisition of the property.

Mark Lawler, Managing Director of Baltic Creative CIC said, “We are absolutely delighted to announce the purchase of 61 – 65 Norfolk Street. This process has been a long time in the making and it has been the most challenging acquisition that I have worked on in my career to date. Liverpool’s tech sector is booming, with figures showing that Digital jobs in the north are growing 10x the rate of non-digital jobs. Here at Baltic Creative we are witnessing a huge demand for dedicated tech space and we’re committed to transforming 61-65 Norfolk Street into a scheme which will support the growth of digital businesses”

Councillor Ann O’Byrne, Deputy Mayor of Liverpool said, “Liverpool City Council are really pleased to see this beautiful old building brought back into use by Baltic Creative who continue to encourage the regeneration and transformation of the Baltic Triangle area. The creative and digital sector is having a significant impact on the Liverpool City Region economy and this development will help create the space required to attract and support more high growth businesses and high value jobs.”

Kevin Horton, Architects Director at K2 Architects said, “We are thrilled to be working with Baltic Creative on the refurbishment of 61-65 Norfolk Street. Our research for the Project has taken us as far afield as Amsterdam, London and even Oslo in our efforts to appreciate the very best this highly competitive sector has to offer its customers. What ourselves and Baltic Creative have planned for 61-65 Norfolk Street is entirely original and will become nothing less than a world leading space for Creative & Digital businesses.

It’s important to note that, whilst part of the building is structurally unsound with sections in considerable disrepair, it does have notable architectural and aesthetic merit. Therefore we, along with Baltic Creative, are passionate about maintaining the historic fabric of the building and intend to preserve as much of the original construction as is structurally possible.”