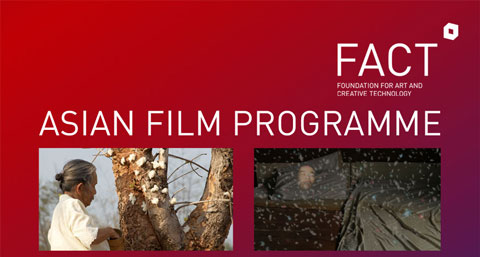 The Box@FACT, 10 November 2009 18.30 – £4.00/ £3.00 (Members & concs)
Governments come and go, but the spiritual, biological and seasonal cycles of daily life go on. The Thai people seem to take political upheaval in their stride. Yet the uncertainty affects everyone, subtly changing the rhythms of work and play, in the city and the countryside. What is the relationship between the cycles of everyday life and the repeating patterns of politics?
This evenings programme is co-programmed with curator David Teh of the Bangkok Experimental Film Festival (BEFF) and reflects two strong themes in recent Thai screen culture: the imagery of everyday life; and the political turmoil that has gripped the country since the fall of the Thaksin administration in late 2006

This special event presents some of the best and rarely seen films from southeast asia, programmed to compliment the UK premiere of, Primitive, Apichatpong Weerasethakul’s new exhibition at FACT. There will also be served authentic asian cuisine over the course of the afternoon and informed discussion with invited guests including, curator David Teh, Dr. May Adadol Ingawanij, a thai cinema specialist from the University of Westminster and curator and writer on Apichatpong Weerasethakul’s works, Karen Newman.
“After decades of near silence, artists from postcolonial Southeast Asian have started to question state propaganda, regarding monolithic national identity, conflict and revisionism, and official multiculturalism. Asian film and  videomakers respond to the twisted mythologies of state power with an arsenal of ambiguity, fantasy and flexible truth, as well as strategies of realism and recording, creating counter-histories from the margins, that either broaden or debunk mainstream public memory.”
The screening programme will begin at 12.00pm and the discussion held at 3.00pm

This visionary film by Apichatpong Weerasethakul exists in dual realms, exploring connected themes of love and desire. A fractured love story is interrupted by a feverish night-time odyssey into the heart of the jungle where shape-shifting spirits and tigers abound as reality and myth magically entwine. The film programme Generation Berlin Wall commemorates the 20th anniversary of the fall of the Berlin Wall on the 9th November 1989.

The experimental and documentary film screenings seek to initiate a discussion about the ramifications and complexities of the underground art practices on both sides of the Berlin Wall. Generation Berlin Wall offers tentatively a comparative analysis between two German film cultures, which were physically divided, yet took place only miles apart. This unique condition produced different temporalities forming individual modalities of ‘modernity’, ‘avant-garde’ and ‘underground’ within what used to be one country.

The programme is co-curated by Maxa Zoller, Florian Wüst and Claus Löser.