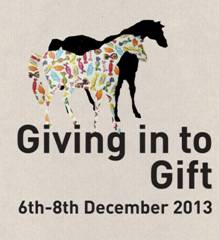 The artists and speakers for a truly unique arts festival which visits the Bluecoat, Liverpool from 6-8 December, have now been confirmed.  ‘Giving In To Gift’ is a festival exploring attitudes to giving in today’s society, with live theatre, audio performances and a symposium.

After an open call for commissions, four artists have been selected to create downloadable Audio Performances under the banner ‘If You’re Not Paying…’, each made to be listened to in a specific situation. These will be available to download free of charge fromwww.givingintogift.org/if-youre-not-paying from Friday 6 December, kicking off the festival weekend and will explore the unique potential for generosity that the internet provides.

The four audio performances and the situation in which they should be listened to are:

Joseph Mercier & Dinah Mullen – In the middle of the night…

When walking alone late at night in an urban area.

Penny Whitehead and Dan Simpkins –Self-welfare: Something for Nothing or Nobody
For state benefit claimants in stressful situations

Sublime & Ridiculous – In My Shoes: Suck it Up
A one-person show to be experienced in any restaurant.

There There – Text HOME (to 78070) for free advice and help with travel documents
Every step of your immigration way.

For more information on each audio performance please visit www.givingintogift.org/if-youre-not-paying.

On Sunday 8 December, a symposium entitled Generosities in Economy will provide an opportunity to explore the role of gift-giving and generosity in a range of fields and disciplines. The symposium will take place at community enterprise Homebaked in Anfield and feature a range of speakers.

Confirmed so far are The Anfield Wrap’s Neil Atkinson (www.theanfieldwrap.com) and Phil Frampton from Manchester FC United, a community football club owned by its members (www.fc-utd.co.uk), who will be talking about generosity and finance in football in a globalised, post-Premier League era.

Festival organiser Tim Jeeves will be in conversation with his brother, Paul Jeeves, talking about their experiences of bone marrow transplantation. Paul will recount his experience of being a donor to someone he never met, while Tim will talk about the reverse; receiving marrow from a stranger, whilst Jane Trowell from arts activist group, Platform (www.platformlondon.org), will discuss making gifts of self-care and finding those ‘lovely limits’ that enable us to do can do our work more sustainably, however urgent it is.

Generosities in Economy is free to attend and unticketed. More speakers will be announced this week at www.givingintogift.org/current-projects/generosities-of-economy-symposium.

For the live performance strand of the festival, producer Tim Jeeves will appear in a one-man theatre piece, The Kindness Of Strangers, which premieres at The Bluecoat on 7 December. In 1997, Tim was studying for his A-Levels when he first encountered Tennessee Williams’ play ‘A Streetcar Named Desire’ and the tragic character of Blanche Dubois, a woman, dangerously mismatched to her surroundings, whose eventual undoing is encapsulated in the line, ‘I have always depended on the kindness of strangers’.

A year later, in 1998, after intensive treatment for malignant tumours in his leg, lungs and liver, Tim also turned to the kindness of a stranger when he was given bone marrow by an anonymous donor. Partly a return gift to the most significant person Tim has never met, but also an exploration of how we deal with another’s generosity, The Kindness of Strangers opens a bag of marrow and – even though it might get a bit messy – takes a look at what’s inside.

The Kindness of Strangers is ticketed, with tickets ranging in price from £5 to minus £5 (it being a festival on gift, Tim felt that ticket prices should be a little unconventional!).Tickets are available now, in person at the Bluecoat or online here:www.thebluecoat.org.uk/events/view/events/1877

Festival producer Tim Jeeves said: “Although this is now the third year that we have been producing Giving in to Gift, I am constantly struck by how many different areas the theme of gift and generosity can touch on. It feels like it’s one of those topics the closer you look the more can be seen. With this year’s work exploring everything from the welfare state to my own medical history, and from football to immigration, I’m very excited about the mix that has been assembled and am really looking forward to the conversations that it will initiate.”

This Is East – Exhibition in Manchester

Substitutions at Only A Game?