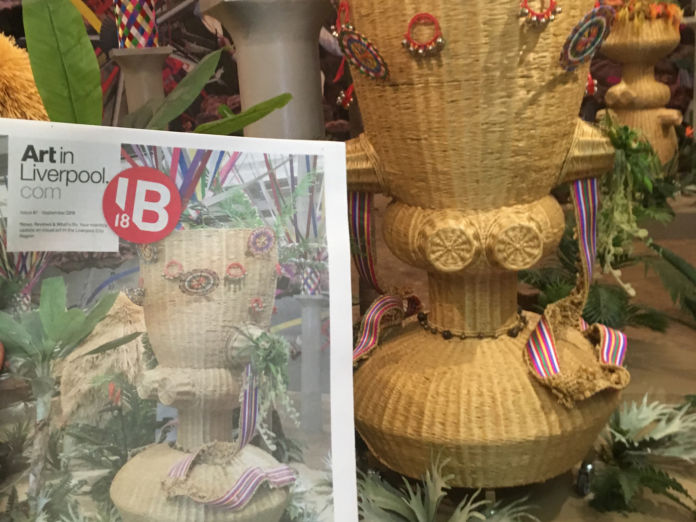 You know at the Docks, where people leave their padlocks hanging from chains overlooking the Mersey? Behind Tate, on those lovely benches? Well there anyway. I found myself sat there with nothing to do other than sit for a while, for the first time in a long time.

We’re reaching the mid-point of the Independents Biennial, Art in Liverpool’s new project, relaunching one of Liverpool’s best loved festivals and extending it to the entirety of Merseyside. The last 41 days have been completely manic at our offices, and in our galleries, so I hid away for an hour just watching the water.

I struggle with concentration, for those who know me it’s very apparent. My mind skips from one idea to the next, racing between plans at a rate I sometimes lose track of. So over the last few months, having plans thrown at me, and making it my goal to make them happen (for the most part) has meant that finding space to sit like this has been hard to achieve.

In the middle of what was fast becoming the most stressful week of the Independents Biennial, and the most chaotic run up to an issue of this magazine we’ve had, it felt important to make time for calm.

I call these my tourist days, rediscovering places I’d forgotten and popping in and out of galleries with my Art in Liverpool hat well and truly off.

Just here, sitting in front of the railings separating me from the river, there is so much warmth on a fairly miserable rainy day. Delicate locks left by couples and siblings, parents and their children, interspersed with scouse mischief in the form of massive bike locks wedged inbetween – “my love is bigger than your love”.

So off I set to the first stop; Tate Liverpool. There’s a reason this place has spent 30 years as the most visited UK art gallery outside London. It fits so well in the docks as part of Liverpool, and set itself up as a teacher for the entire city when it moved here. It still feels that way. I remember these tourist days when I was a kid, setting off with cousins, aunties, uncles to just show them the sites. It’s probably why I enjoy being in galleries so much today. They feel like an escape as much as an education.

Anyway, from Liverpool Biennial at Tate, to Liverpool Biennial at Open Eye. I’ve not raved about a film like this for a very long time. Madhia Aijaz’s film at Open Eye summed up so much of the Biennial; its title; its artists; its team; its partners. I’ll not go on, because there’s a full review later in this issue about this film, but in short it made me feel like a global citizen, connected and responsible.

From Open Eye, bearing in mind this is a tourist day, I got myself some chips. They weren’t great, and the van forgot my sauce so I was left walking through the salty air of the docks with a dry punnet of chips. But it got better, and I decided to go further afield, and try out somewhere new, so I hopped on a train at Moorfields at got off at Waterloo. A short and slightly disorientating walk later I spent the rest of the afternoon on Rimrose Valley Country Park.

I’ve never been before and there’s a strong and sad chance I’ll never go again. For this year’s Independents Biennial, the park is being occupied by artists reacting to the news that a major bypass is planned to take heavy goods vehicles direct to the North Docks. The bypass plans to cut right through the middle of the valley, one of Sefton’s largest green spaces, left mostly untouched by landscapers until now.

So the end of my tourist day ended a in a beautiful place, with an unwelcome bitter taste. I would urge anybody to visit Rimrose Valley while the artists are in residence, but to keep it safe for longer, for now, sign their petition to stop this road: https://www.change.org/p/secretary-of-state-for-transport-stop-the-dual-carriageway-through-rimrose-valley