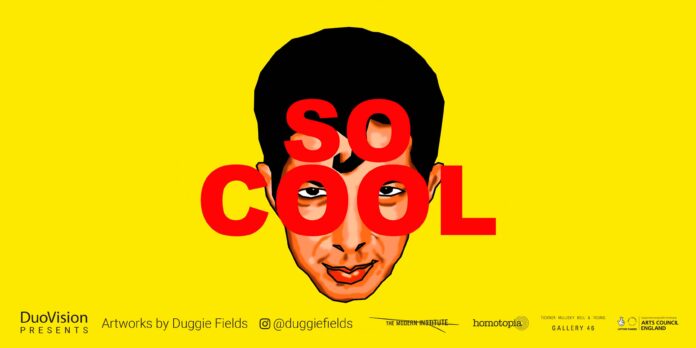 The late British artist Duggie Fields is part of an exhibition taking place exclusively on digital billboards across Liverpool as part of Pride month, curated by DuoVision with support from Clear Channel and Arts Council England.

The curated works celebrate the artists and individuals who have inspired DuoVision, and the eight years they spent working from The Gallery Liverpool. Since losing the legendary independant gallery in Liverpool in 2020, which featured work by Pam Hogg, Marc Almond, Caroline Coon and Jarvis Cocker,  to developers in 2019, Duovision have been working in various locations around the UK having just completed the enourmosly succesful Queer As Folklore exhibition at Gallery 46 London. The billboard exhibition is designed as a tribute to the artists, but also a reminder of the importance of LGBTQIA+ visibility.

The brilliant, but frequently overlooked pop artist Duggie Fields was the first to be exhibited by DuoVision in Liverpool as part of Homotopia festival 2012. The success of this show propelled Duovision to curate 30 further exhibitions celebrating the LGBTQIA community. Duggie sadly passed away earlier this year, so DuoVision wanted to commemorate his brilliance and importance with a display of his work. Duggie was instrumental in introducing and championing other artists, like Caroline Coon, and the spirit of that support runs through DuoVision’s work.

Emma Worth is a Liverpool based portrait artist who frequented The Gallery where she met queer artists Sadie Lee, Matthew Stradling and Jason Carr. She was inspired to create work about them alongside Billy Wilson, who founded The Gallery, to encourage and exhibit local artists. It was Billy’s enthusiastic support for DuoVision that allowed them to grow, develop and then continue working after his tragic early death in 2016.

Another inspiration to DuoVision is painter David Lock who was involved in a terrible accident, but has overcome the difficulties of his serious injuries and continues to work, creating fantastic portraits which have been exhibited internationally. David is also the nephew of trailblazing gay playwright Joe Orton who was another tremendous influence on Duovision.

“This Pride month it is vital that queer culture becomes more visible, not less. We might not be able to protest or march together, but that does not mean we cannot celebrate queer artists and trailblazers. Our stories are our own to be shared and celebrated and this is what each of these artists represent. The closure of our gallery before the Covid pandemic has been devastating and we are actively looking for new gallery space. But in the meantime, we continue to deliver art in unusual spaces and places. We consciously chose locations outside of Liverpool city centre to bring a little queer creativity to the city for Pride. Everywhere can be a gallery if you have the right support”.

08 Shirt gets a Red Card