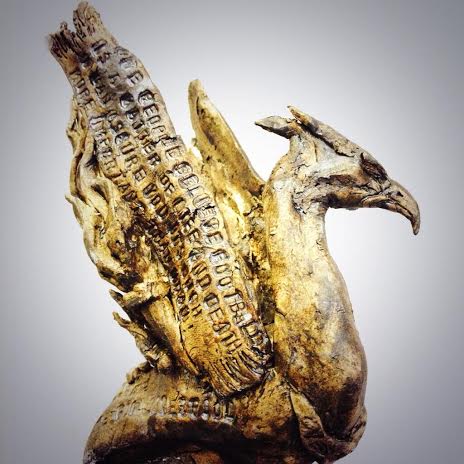 Liverpool Football Club stars Stephen Gerard and Luis Suarez have led the charge into a new charity partnership with internationally renowned sculptor, Emma Rodgers.
Emma, whose work is held in prestigious collections around the world, gifted her interpretation of a Liver Bird to the Mayor of Liverpool, Joe Anderson who put it up for auction on Twitter earlier this week.
Hoping to raise money for his Mayor Hope Fund, the elegant new Liver Bird was already causing a stir in the birds’ home city weeks before the auction. It’s wings are cleverly constructed as football scarves in which the artist has embedded some of Bill Shankly’s most famous words. 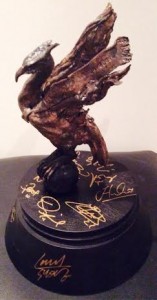 An homage to LFC as well as the historic emblem of Liverpool, reds fans have taken it to heart after pictures of the porcelain piece appeared in the Liverpool Echo and on The Mayor’s website. The Reds are so impressed by the sculpture that players Gerard, Suarez and teammates Daniel Agger, Philippe Coutinho and Jordan Henderson, along with manager Brendan Rodgers (no relation to the artist), have all signed the base of the statue.
And the club itself has given the new bird the rare honour of its seal of approval by allowing it to bear the official LFC hologram. They hope their endorsement of the Red Liver Bird will raise further interest and increase the amount raised at auction by the valuable piece. The auction took place last week online on Twitter @MayorsHopeFund, using the hash tag #HopeFundAuction, part of a project dedicated to supporting people living in poverty in Liverpool. The final bid for the piece was £2100, but much more money was raised in donations too.

“I can’t believe that so many Reds players have been so kind and come together so quickly to support the auction of this new statue,” said Emma, herself a Merseyside native. 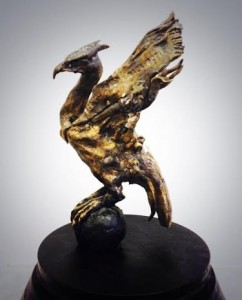 “It was a unique piece anyway and I was delighted that Joe wanted to auction it to raise funds for his charity, but I hadn’t expected it to capture the public imagination so quickly.”
Such is the momentum gathering around the new bird, that Everton fans are clamouring for fair play.
Prominent Blues fan, BBC Radio Merseyside’s Sean Styles spearheaded the call for a Blues’ version when he interviewed Emma last week: “Can we expect a bit of balance Emma? Will you be making one for us Blues too?”
She promised to raise it with the Mayor. But as he is a Blue himself no objections are expected and Liverpool can anticipate the delivery of a twin Blue Liver Bird later this year.
Advertisement

Northern artists to be commissioned for the New Creatives project

Commuters on the Mersey Ferries will be treated to The Mersey...

‘Turning The Place Over’