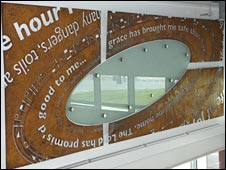 A piece of artwork, dedicated to anti-slavery campaigner John Newton, has been unveiled in Liverpool – the first one in Europe.

The words and notes of his famous hymn, Amazing Grace, have been cut out of a metal plaque on the city’s waterfront.

The Bishop of Liverpool, James Jones, joined its creator, Stephen Broadbent at the ceremony on Thursday.

Commissioned by Merseytravel, it is one of the last phases of the new £10.5m Pier Head Ferry Terminal.

John Newton fought for the abolition of slavery after being both a slave ship captain and a slave, during the 1740s.

Keep You Eyes on the Prize – At Slavery Museum