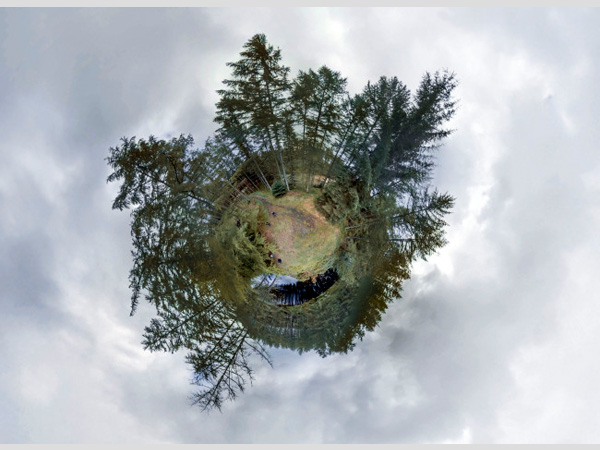 This Autumn, in collaboration with the Forestry Commission England’s Forest Art Works programme, Abandon Normal Devices will transform Grizedale Forest in the heart of the Lake District into an exhilarating and illuminating retreat that will reveal the secret architecture of the forest through a programme of artworks, experiences, trails and film happenings.

Artists, designers, scientists and filmmakers have been brought together by AND to explore the woodlands and nature’s processes, examining the forest from a different viewpoint informed by the newest technology.

See the website for full details. There are also details of where to stay and how to get to Grizedale

// AND FESTIVAL 2015 – PROGRAMME HIGHLIGHTS
TREKS & TRAILS
Artworks are sited across the sculpture park in temporal, distributed and sculptural ways.

In the Eyes of the Animal // Marshmallow Laser Feast
A new commission enabling audiences to encounter England’s forests anew through an immersive virtual reality experience, told by the inhabitants of the forest. This is a fictional experience of transformation and natures cycle. Creative collective Marshmallow Laser Feast (MLF) delight in exploring the line between virtual and real-world experiences and with this project will be taking audiences to a unique virtual reality setting created specifically for the Forest. This piece was filmed using unmanned aerial vehicles (UAVs) or ‘drones’ and bespoke 360º cameras, and is set to a binaural soundtrack using audio recordings sourced from the surrounding woodland

Love Motel for Insects // Brandon Ballongee
The UK Premiere of a new iteration of Love Motel for Insects, site specific to Grizedale Forest, will be a large-scale living sculpture for the forest inviting insects from across the forest to stay at the Love Motel for the festival. This sculpture will be on site for a month using ultra-violet lights on enormous sculpted canvases to attract an array of bugs and insects, the motel will create an opportunity for people to interact with the rarely seen nocturnal arthropods.

Spreadkom // Brid A
Spreadkom is an alternative communication system created especially for the forest by Italian collaborators Brid A, The new commission will encourage you to think about our forgotten and hidden abilities to communicate, distributed throughout the forest will be a series of devices, all powered by air, water or sunlight. These devices will be able to communicate with each other and with listeners (visitors) by sending different sound codes, mimicking the natural sounds of the forest. Spreadkom avoids the use of a central operation unit based network like GPS or internet and emphasises alternative ways of communication and orientation without relying on standard technology that permit all sorts of abuse by the possibility of tracking or spying.

Where the City Can’t See // Liam Young
From a viewing pontoon deep within the forest, we can see the landscape through the eyes of the machines that construct it. Revealed via emerging technologies of laser scan surveyors, this short film seen through observation equipment, exposes a vibrant and hidden underground community. Where the City Can’t See is a prelude to the world’s first fiction film made entirely from data by author Tim Maughan and designed and directed by speculative architect Liam Young.

Searchers // Jen Southern
Bringing together two contrasting perspectives of search and rescue missions, in this new work Jen Southern looks to understand more clearly a rescue dogs activity on a search mission. Jen has captured GoPro footage and GPS data from a Langdale and Ambleside Mountain Rescue Team dog then taken inspiration from the ‘Gibson Girl’ kite historically used in life-rafts to send an S.O.S. radio signal, the images and data collected will be printed onto kites for visitors to fly across the skies Grizedale Forest. As you fly the kite, with your feet on the ground and your head in the clouds, the kite tugs at your hands like a dog straining at the leash, and will visually broadcast your place on the ground.

Origami Space Race // Saso Ssedlacek
Flight isn’t just explored through drones and Unmanned Aerial Vehicles (UAV’s) at Grizedale Forest, but through Space aircraft too. Officially the Space Race has arrived in Cumbria and visitors to the festival will be able to make their very own airplane outdoors as part of the Origami Space Race. Developed from a challenge made to the Japanese Scientist Shinji Suzuki from the University of Tokyo, in 2009, Shinji was the first to launch an origami prototype airplane from International Space Station. Since then, the Space Race has heightened and at Grizedale, the competition will begin again when we compete for the best origami space airplane with the final goal of initiating the open source space programme as an alternative to official space programs.

EXHIBITION
This ‘living’ exhibition housed in Grizedale Forest responds to the site and it’s main inhabitant the plant.

Seeing the Forest Through The Trees // Various Artists
This topical and enlightening exhibition dedicated to the lifestyles of plants, features artworks which celebrate plants as active and autonomous beings perceiving the world in ways both alien and familiar to us. From looking at plant intelligence to the queer sex of plants these works will demonstrate the need to understand plants on their own terms. Featuring world class artists Karl Heinz Jeron, Chiara Esposito, Spela Petric, Dimitris Stamatis and Jasmina Weiss, Pei- Ying Lin. Curated by Monika Bakke.
ONLINE PROGRAMME
The online projects will look at to the machines eye view and what it means to be “offline”. Highlights include:

Cloud Face // Shinseungback Kimyonghun
Humans see figures in clouds: animals, faces and even god. This kind of perception also appears in computer vision. Face-detection algorithms sometimes find faces that are not there as a result of computer’s vision error, but they often look like faces to human eyes, too. During the Festival Cloud Face will survey the skies above Grizedale Forest collecting the faces from the Cumbrian skies. These will be displayed online and in the walls of the visitor centre during the festival. Shinseungback Kimyonghun’s work attempts to examine the relation between computer vision and human vision.
LABS
The labs support the development of artists interested in site specific practice and the tools of science.

Home // Geraldine Pilgrim
How do we inhabit space/spaces and what are the traces that we leave there? Why do we feel at home in some places and not in others? Is home a concrete place or an emotional response? How are we affected if we have lost our home or never had one. Home is a chance to question whether “home” is a place, atmosphere, or person. AND is collaborating with Geraldine Pilgrim on this workshops run by artists for artists.

The Living Deadwood Microbiology Workshop
Night of the Living Deadwood is a workshop led by microbiologists Dr Rod Dillon and Dr Jackie Parry it forms part of an ongoing collaboration with Abandon Normal Devices to explore current concepts in the biological and biomedical sciences. Fungi are a major part of the secret architecture of the forest forming communication channels between trees with interspecies. The workshop will explore the dynamic processes of fungal-tree relationships examining fungi and their reproduction, which is essential for survival of the forest. Supported by Abandon Normal Devices