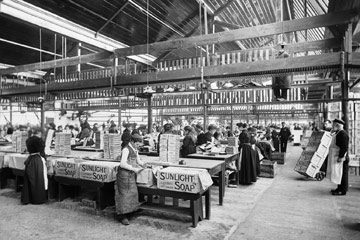 A century ago Britain led the world with booming industries, powerful commercial links and a supreme navy – all reflected in the remarkable photographs of Bedford Lemere & Co.

Liverpool was the second city of the British Empire and its bustling docks, crowded offices and noisy factories closely echoed London and other ports and cities.

An Age of Confidence: Photographs by Bedford Lemere & Co 27 January – 7 May 2012 at the Lady Lever Art Gallery features 43 fascinating framed images giving a deep insight into a vanished world.

London–based Bedford Lemere & Co was the leading architectural photography company in England for 50 years. Its clients included many of the top architects, designers, industrialists and retailers of the day.

The wealth of late Victorian and Edwardian Liverpool often brought the company’s photographers to Merseyside – it was the firm’s second-most photographed location.

Bedford Lemere, who established his company in 1861, and his son Harry were outstanding technical photographers. They and their small team produced images of exceptional quality, depth and sharpness with large glass plate negatives.

They were innovative and pioneered a new photographic genre by exploiting the market for images of new buildings reflecting their high quality of construction and design.

All the images in the exhibition are from the Bedford Lemere & Co Collection held in the public archive of English Heritage.

Sandra Penketh, head of Lady Lever Art Gallery, says: “These brilliant photographs demonstrate clearly how the reputation of the company rested above all on the quality of its work. They have a depth and clarity which invites the viewer to enter.”

Bedford Lemere & Co’s photographs reflect the air of confidence that permeated most sections of British society – rich and poor, young and old. Nothing seemed impossible and the buildings and structures of the period reflected that sense of certainty.

Bidston Court, Vyner Road South, Wirral (1894): A group of smartly-dressed people in a horse-drawn coach outside the half-timbered mansion built for the soap manufacturer Robert Hudson in 1891. In 1929 the house was dismantled and moved several miles to Frankby. It was reassembled and renamed Hill Bark, now a hotel.

Artist Lord Leighton’s studio, London (1895): There are several of Leighton’s paintings in the Lady Lever Art Gallery collections include the huge panoramic Daphnephoria. Leighton’s house and studio is preserved and open to the public.

Sunlight Soap Works, Wirral (1897): Workers are seen busy in the packing room. The output of William Hesketh Lever’s soap business rose from 3,000 tons a year in 1886 to more than 14,000 tons four years later. Production continued to grow for years at a similar rate, led by Lever’s best-selling Sunlight Soap here being packed for despatch.

The Arcade, 81- 89 Lord Street, Liverpool (1901): Designed by the Birkenhead-born architect Walter Aubrey Thomas who also designed the Royal Liver Building. The Arcade comprised  street-front offices and shops with an ornately-decorated shopping arcade behind.

Trading Hall, Liverpool Cotton Exchange, Old Hall Street, Liverpool, (1907): The Cotton Exchange was built in 1906 to the designs of Matear and Simon, who also commissioned this photograph. The surviving part of the building is now used as offices.

Portrait of architect R Frank Atkinson and his family (1912): Taken around the time the Atkinson-designed house Redcot was photographed by Bedford Lemere & Co at Blundellsands, Liverpool.

The orchestra at the Adelphi Hotel, Liverpool (1914): In this photograph of the hotel’s resident orchestra, the conductor – Señor José Gomez – is distinguished by his baton, white waistcoat and tie. Señor Gomez commissioned this photograph during Harry Lemere’s visit.

High Explosives performance troupe, Bootle (1917): Women munition workers dress up in comic Pierrot costumes for a performance similar to those popular in seaside resorts and music halls. This picture demonstrates how people let off steam during the First World War.   More …

White star liner Olympic – sister of Titanic – looking aft (1920): The White Star Line originated in Liverpool and was re-established by Thomas Ismay in 1867. A partnership was struck with the Belfast shipbuilders Harland and Wolff, who built the Olympic class lines to rival those of White Star’s competitor Cunard.

The exhibition is organised in collaboration with English Heritage.