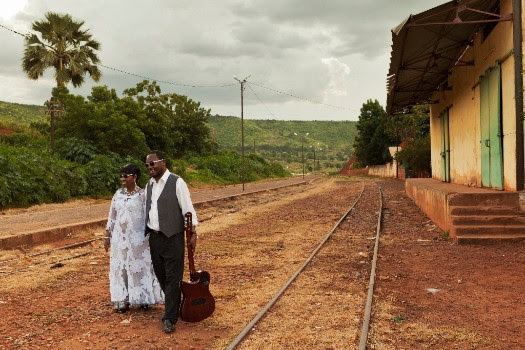 Each year DaDaFest brings together local, national and international talent. This year Amadou and Mariam, the Grammy nominated musical duo from Mali will be headlining.

This year’s festival, DaDaFest’s thirteenth since its re-branding, will take place from 17 November to 3 December 2016. The festival will present high quality and innovative work produced by local and international artists that will challenge ideals and celebrate disability culture. DaDaFest has organised an exciting programme of live arts, comedy and much more.

Amadou and Mariam’s music has been described by The Telegraph as: “Mixing up elements of rock, pop, blues, jazz, soul and funk, each song finds its way into a supple groove and just bounces around there as though Amadou’s guitar strings and Mariam’s vocal chords were made of musical elastic.”

The duo are “really excited and cannot wait to be returning to the UK in December to perform at DaDaFest!”

Amadou and Mariam’s infusion of traditional Malian sound with rock guitars and a range of instruments from Cuba, Egypt, Syria and India in a combination that had been dubbed “Afro-blues”. The duo met in the “Mali Institute for the Young Blind” performing in the Institute’s Eclipse Orchestra. It was here that they discovered their shared interest: music. They made a name of themselves playing Malian blues music in the mid-80s. Soon they attracted the attention of Stevie Wonder, and went on to perform at festivals around the world.

Seven albums later, the husband-and-wife team has continued to expand their horizons. Touring with Coldplay and U2, jamming with musical heroes such as David Gilmour and Johnny Marr. As their popularity has grown, so has the scope and ambition of their music – their latest album, Folila, features African artists from the duo’s hometown of Bamako, as well as contributions from American artists such as the indie rock band TV in the radio, Santigold and Nick Zinner.

At its core Folila is a fusion. Filled with African and Western musicians it is a perfect combination of Malian sound and western influences without sacrificing the Afro-blues essence that is the crux of Amadou and Mariam’s sound. Each song is remarkably individual, whilst still sharing a common ground.

Ruth Gould, DaDaFest’s Artistic Director is: “thrilled to welcome Amadou and Mariam”. She is confidant that “their work and presence will make this year’s festival one to remember!”

Michael Eakin, Liverpool Philharmonic Hall’s Chief Executive also had very positive outlook. He said: “We are delighted to be hosting a major DaDaFest International concert again. Following the superb Staff Bendi Billili in 2014, the brilliant Amadou and Mariam will be one of the highlights of our programme in 2016. The fact that DaDaFest International is bringing artists of this calibre to the city is testament to the importance of the festival. We are looking forward to a memorable night.”

Tate Liverpool presents the faces of Germany between the two World...

Turning The Place Over – See the Movie