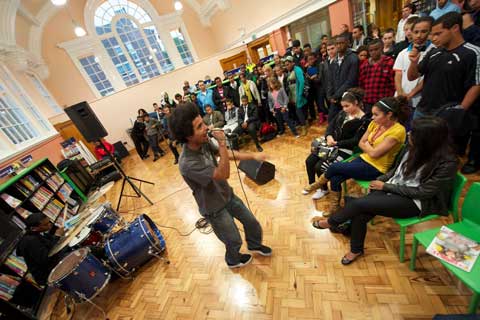 More than 120 young people from Toxteth-based music and writing groups were invited to attend the 108-year-old library, which has recently undergone a £1.3m makeover including the creation of a new exhibition and performance space.

His performance was part of a tour of libraries across the country this summer. The tour is in partnership with the national charity The Reading Agency and Akala’s Hip-hop Shakespeare Company: it is part of a major drive to fire up young people about reading and transform the way they think about libraries.

Events will take place in libraries across the UK, with the final show taking place at the British Library in London in November.

The free evening shows consist of a half hour performance by Akala, accompanied by the renowned drummer Cassell ‘The Beatmaker.’ These are followed by a Q&A session with  Akala about how his love for reading has influenced his new album DoubleThink – inspired by three works of dystopian fiction: George Orwell’s 1984, Aldous Huxley’s Brave New World and Yevgeny Zamyatin’s We.

Akala, winner of the 2006 Best Hip-Hop Artist MOBO Award, said: ”I’m really excited about this library tour and hope that it will open young people’s eyes and help them to see libraries as thriving hubs of creativity, rather than stuffy, solitary places. My passion for reading pervades my own creative work and new album, so I also hope that these performances will challenge preconceptions and encourage young people to develop a passion for reading and words.”

Akala’s tour is part of The Reading Agency’s campaign to bring reading into the 21st century, and inspire more teenagers to read and get involved in creative activities. In recent months keen celebrity readers and authors, including Sophie Dahl and Michelle Gayle, have taken part in activities to bring reading and libraries to life for young people.

From among the young people who attended Carlos Eyo from Aim Higher said: “It was really good, everyone was happy and enjoying themselves. Akala was not a typical rapper talking about guns but about love, peace and reading. It was really inspiring”

Liam Walker from Head Chalk Records said: “It was an eyeopener: it made you think more about music and lyrics. It was inspirational and motivational.”

Library staff were also delighted that over 16 of the books featured in the event were borrowed on the night, with some people joining the library to do so.

Ruth Harrison, project manager at The Reading Agency, said: ”At The Reading Agency, we want to transform the way libraries engage with young people and broaden the definition of reading. What better way to do this than bringing an acclaimed hip-hop artist such as Akala to libraries around the country, to perform and talk about how reading has inspired his own work.

”It is fantastic that so many 21st century libraries across the UK now offer a new, lively service and we strongly believe that old fashioned attitudes to reading and libraries must change and that teens need to be engaged on their own terms, if they are to develop a lifelong passion for reading.”

Councillor Wendy Simon, Cabinet Member for Culture and Tourism at Liverpool City Council, said: ”Toxteth Library plays a huge role in the community as a place to learn and to enjoy cultural activities. Thanks to the revamp we can host exciting events like Akala’s show and get our young people turned on to reading in a way we could have only dreamed about before. You only had to see the joy on the faces of those here last night to see what an impact a library can have if you use it creatively.”

Time running out to see work of ‘one to watch’ young...